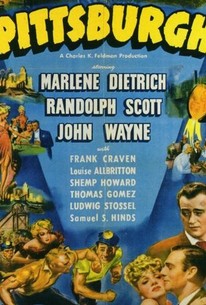 The three stars of Universal's The Spoilers -- Marlene Dietrich, John Wayne and Randolph Scott -- were reunited for the pageantlike adventure yarn Pittsburgh. As indicated by the title, this is a saga of the steel industry, with longtime buddies Pittsburgh Markham (Wayne) and Cash Evans (Scott) rising from the ranks of miners to run their own foundry. Ruthlessly devoted to his work, Pittsburgh eventually has a falling out with Cash and also jeopardizes his romantic relationship with beautiful Josie Winters (Dietrich). Thanks to his duplicitous business practices, Pittsburgh loses both Josie and his steel mill; but when America enters WW II, he redeems himself by signing on as a common workman with Cash's still-thriving organization. Well acted and directed, Pittsburgh nonetheless lacks the extra spark which transforms a good film into a great one.

Paul Fix
as Mine Operator

Wade Boteler
as Mine Superintendent

Harry Cording
as Miner
View All

The weakest of the 3 films Wayne made with Dietrich, a WWII morality tale about greed and redemption--the film was released exactly one year after Pearl Harbor, which features as a plot point in the triangular saga in which Randolph Scott is third wheel

Two fisted entertainment. Marlene is uber glamorous and totally out of place but of course she makes it work. Wayne and Scott are well matched. If it wasn't for the overripe voice over this would be a better film.