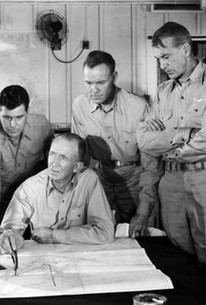 A U.S. Naval Officer fervently attempts to convince his superiors that their ships can be used as aircraft carriers. Gary Cooper stars as Jonathon L. Scott who proves his claim that it is indeed possible to land a plane on deck, but no action is taken by the military to deliver carriers. Jonathon then visits D.C and successfully lobbies for for his cause, meeting an old friend's widow, Mary Morgan (Jane Wyatt) during the stay. After losing his temper with a foreign diplomat, Jonathon is sent to Panama on a desk-punishment assignment, but after the Navy produces sufficient carriers, he is sent to serve on one. Sustaining an injury, he is transferred to a hospital where he and Wyatt grow closer and, when released, he marries her. The attack on Pearl Harbor prompts the Navy to assign Jonathon his own aircraft carrier which undergoes viscious treatment, but he diligently saves the ship and steers it back home where he receives recognition and vindication about his claims. Filmed mostly in black and white, Task Force features actual footage of WW II battle scenes.

This is one of the few films to which Negro soldiers are pictured as being a part of the recent war.

If you like "epic" stories, this will cost you 85 cents.

Though not one of Gary Cooper's or director Daves' best pictures, this is a passably engaging chronicle of theAmerican aircraft carriers from the 1920s to WWII.

The film flies by at a fast pace, as it offers a sweeping history lesson of Naval aviation.

There are no featured reviews for Task Force at this time.