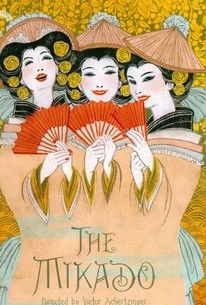 Though it boasts an American director and star, this Technicolor cinemadaptation of Gilbert and Sullivan's comic operetta The Mikado is a faithful record of what it must have been like to attend a performance of Britain's D'Oyly Carte opera company. Rradio tenor Kenny Baker stars as Nanki-Poo, the wand'ring minstrel who wanders into a curious set of situations in the Japanese village of Titi-Pu. D'Oyly Carte perennial Martyn Green plays the leading role of Ko-Ko, the timorous Lord High Executioner who must perform one execution per day or he'll lose his job-and his own head. Ko-Ko finds a likely candidate for decapitation in the form of Nanki-Poo, who feels mighty suicidal when it seems as though his sweetheart Yum-Yum (Jean Cola) is out of his reach. Unbeknownst to Ko-Ko, Nanki-Poo is the son of none other than The Mikado, played with a combination of pomp, circumstance and Noel Cowardlike waspishness by Sydney Granville. Most of the satirical Gilbert & Sullivan songs have been retained, including "The Lord High Executioner", "Three Little Maids from School are We", "Tit Willow", "Here's a How-de-Do", and "The Object Most Sublime". Musical accompaniment is provided by the London Symphony Orchestra.

John Barclay
as The Mikado

Jean Colin
as Yum-Yum
View All

Critic Reviews for The Mikado

Technically the film is as near perfection as may be in an imperfect world.

Beautifully preserves the essence of the work and captures for all time the great Martyn Greene's signature performance as Ko-Ko.

Audience Reviews for The Mikado

There are no featured audience reviews yet. Click the link below to see what others say about The Mikado!