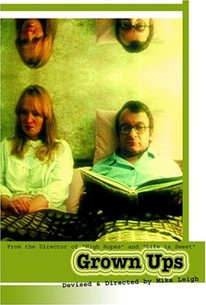 Made for British television by filmmaker Mike Leigh, Grown Ups is a detailed slice-of-life drama about a married, working-class couple in Canterbury, England. The film begins with the young couple, Dick and Mandy, moving to a new, rather small home and becoming neighbors to Mr. Butcher, an abrasive, ill-humored man who they once had as a schoolteacher. This rather awkward living situation soon becomes even more uncomfortable, thanks to the near-constant presence of Mandy's older sister, Gloria. (Gloria is portrayed by Brenda Blethyn, who 17 years later would win recognition and an Oscar nomination for her work in Leigh's Secrets and Lies.) Gloria's eccentricity and desperate, child-like neediness leads her to become increasingly dependent on the young couple, showing up at all hours and rarely leaving. Her behavior grates on the already sour Dick and comes to test Mandy's patience as well. When Mandy's efforts to politely discourage her sister's visits prove fruitless, the extended family is forced into a painful, emotionally charged confrontation. Leigh purposefully alternates the film's more immediate dramatic elements with careful, real-time portraits of daily life, giving equal weight to both traumatic arguments and extended conversations about home decor and vacuum cleaners. ~ Judd Blaise, Rovi

There are no critic reviews yet for Grown Ups. Keep checking Rotten Tomatoes for updates!

There are no featured reviews for Grown Ups at this time.