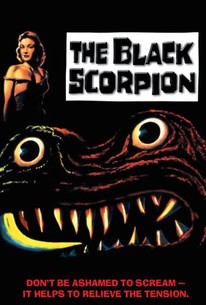 Filmed in Mexico, The Black Scorpion was the last theatrical feature to bear the imprimatur of special-effects maven Willis O'Brien. Allegedly an outgrowth of a ten-minute "test" film, the story is set in motion by a volcanic eruption which releases dozens of giant scorpions from a cave. American geologist Richard Denning and his cohorts try to drive the scorpions back into their lair, but the huge arachnids are soon at large in civilization, munching on innocent bystanders as they go their merry way. The authorities are able to destroy all but one scorpion, who unfortunately is the nastiest of the bunch. The climax takes place in a Mexico City bullring, where the scorpion does battle with a fleet of military helicopters.

Critic Reviews for The Black Scorpion

It isn't on par with such gems as Them! and Tarantula!, but it's a far better bet than The Giant Claw.

Arriving at the (stinger-equipped) tail end of the Cold War-inspired cycle of films about apocalyptic arthropods, 'The Black Scorpion' benefits from its spectacular monsters.

...a drive-in programmer that's run-of-the-mill even by period B-flick standards.

This is a staid, low-budget, B-film sci-fi'er about giant scorpions that come out of a volcano in a remote part of Mexico ...

Audience Reviews for The Black Scorpion

The new MST3K Netflix original has been released and I decided to expose myself to some of the old episodes available for streaming on Hulu and Netflix (there is a different random selection on each platform). Whether it is Joel or Mike watching these awful movies with the bots I do not envy the torture they are put through. Their snarky comments add some entertainment value, but my ratings are based on the movie's quality itself and not the extra material broadcast from the satellite of love. Woah, the poster for this movie is so ugly. Fortunately this was one of the better low-budget sci-fi horror flicks shown on Mystery Science Theater. Filmed in Mexico with several Mexican cast members giving it great El Norte flavor. And the legendary Willis O'Brien was supervisor of special effects. The stop motion action and way the monsters interact with the live-action people is a step above because O'Brien was involved in this production.

Yep still in 1957, this time there's a Mexican collaboration so...well basically its set in Mexico, its a Mexican giant bug movie. This time as you may well have guessed, the main creature, or creatures , are scorpions, scorpions with humanoid faces? Yep that's one negative point right there folks, the scorpions in question have two humanoid eyes and a big toothy gaping maw, with one fang much bigger than the other. Also not too sure why the title is 'The Black Scorpion' when there are many of them running around, just ride with it OK. So this time an earthquake hits Mexico which in turn causes a volcano to rise up outta nowhere, so its a double whammy of natural disaster reasons this time. These events somehow unleash hordes of giant scorpions from the depths of the Earth which have somehow survived since prehistoric times. But its not just the scorpions oh no, there are also giant spider things and giant worm things down in the depths too, thing is they don't come to the surface to eat people. So, what do the locals do in times like this? why they bring in a good looking American scientist bloke of course. This chap also just happens to bump into an attractive local female rancher whilst doing his work, luckily she agrees to help him...phew! we almost didn't have a love interest there. Anyway, you know the rest, they gotta kill these giant things asap. The big difference with this movie over many other giant bug flicks of the time is, in this movie they opt for an all out stop-motion affair. Enter Willis O'Brien of 'King Kong' fame for all the giant creature effects. I'm not overly sure how big of a production this was to be honest, it looks good, but being half of a Mexican project leads me to think it may have been a smaller budget affair. If so nabbing O'Brien for the effects was a solid move as these stop-motion scorpions really look the business as you would expect. Strangely enough you can kinda tell they are O'Brien's work by the way they move, you can see the similarity to his work in 'King Kong', but yeah these scorpions look great, very realistic, very creepy and animated brilliantly. Its such a shame that they spoil the entire effect with these ridiculous close ups of the scorpions 'face'. The whole model is laughable, as I said earlier they have two humanoid eyes and a big toothy maw, plus they are dripping with slime or ooze. Its such a shame because you go from the highly atmospheric shots with O'Brien's skilled stop-motion scorpions, to a jokey hokey B-movie monster model/puppet that looks like an angry cartoon. I have also since found out that the silly roaring that comes from these scorpions is actually the same sound effect used in 'Them!'. Plus there is a rumour that O'Brien used old models left over from 'King Kong' for the giant worms and spiders. Both pieces of information lead me to think this was more of a smaller B-movie project, not really intended to smash records or anything, just jumpin' on the bandwagon. As for the plot and movie itself, well obviously its pretty dumb. The whole fact that these people discover a new world under the surface with new lifeforms, never seems to dawn on anyone, they just wanna kill everything. The fact that an entire world could even exist like that is also, obviously, pretty ludicrous and makes no real sense. This world also seems to be extremely deep below the Earth's surface, so how do these scorpions manage to climb out? they seem unable to do so when the heroes venture into their world, I guess that could be down to the sunlight aspect though. Yet again, as with all these movies, how the hell did no one ever notice these giant things running around in the first place?! I must also add that this movie is by far the most violent and scary of all the big bug movies I've come across so far. They really did push the boundaries a bit with this one, I can actually see how people would have been genuinely scared watching this back in the day. The train attack sequence is a perfect example of this, its dark, eerie and brutal. The scorpions attack it by ramming it off the tracks (which in itself is pretty horrific watching the model twist and turn), then as people flee they go around picking them up in their pincers and pulling them apart, although you don't see that but you get the idea. The final battle sequence between the alpha scorpion and a load of tanks, jeeps and infantrymen is also pretty violent, for the time. Its a decent battle with some solid action I can't deny, plenty of tanks buzzing around pumping shells into the scorpion, explosions kicking off everywhere, gunfire, choppers etc...its like watching a movie adaptation of the arcade game 'Rampage'. Definitely one of the best giant monster fight sequences I've come across and it really adds valuable plus points to this movie overall. I'll be honest, I didn't like the Mexican setting that much because it seemed to enhance the B-movie aspect of it. All the extras running around with their Mexican accents and attire, it just looked even more silly that normal. Saying that the main cast weren't anything too special either, the usual thing really. They do the job well enough, the main hero sounds stern and commanding, whilst the female screams appropriately, same old, no crusty old scientist though. Once the vast underground world was discovered this movie really got into gear and engaged me, up till then I was getting a tad bored admittedly. The effects are some of the best you will see for this subgenre and it has some great thrilling sequences, other than that, business as usual.

A standard B-movie about gigantic scorpions terrorising Mexico City. I like the effort they put in the stop motion sequence but it was still as flimsy as a creature feature can get. I mostly zoned out during the film and couldn't remember much.