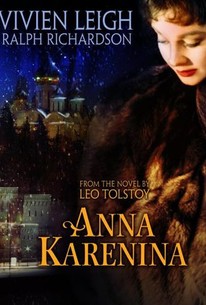 This 1948 adaptation of Leo Tolstoy's Anna Karenina was produced in England by Alexander Korda, and released in the US by 20th Century-Fox. Vivien Leigh plays the title role, a 19th-century Russian gentlewoman married to Czarist official Ralph Richardson. Though her marriage is not intolerable, Anna is swept off her feet by dashing young military officer Vronsky, played by Kieron Moore. The ensuing scandal ruins Anna's status in society. Anna Karenina had previously been filmed twice in Hollywood, with both versions starring Greta Garbo.

Patrick Skipwith
as Sergei
View All

This version of Tolstoy's Anna Karenina, made A.G. (After Garbo), was not a success when it was first released, and it's still a failure now, but it's an often exquisitely sumptuous misfire, all the same.

Superb film version of the Tolstoy novel, with an extraordinary Vivien Leigh at the peak of her beauty and talent.

There are no featured audience reviews yet. Click the link below to see what others say about Anna Karenina!