Ali Baba and the Forty Thieves1944 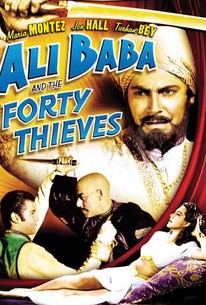 Ali Baba & the Forty Thieves is glorious escapist nonsense in full Technicolor, starring the King and Queen of Glitz, Jon Hall and Maria Montez. The old Arabian Nights story has been heavily overhauled to make the 40 thieves semi-good guys, who adopt young Ali Baba, little realizing he is the son of the Caliph of Baghdad. Years later, the grown-up Ali (Hall) is the leader of the bandits, fighting against the tyranny of the unspeakable Hulagu Khan (Kurt Katch). Seeking further vengeance for his father's death, Ali kidnaps Amana (Maria Montez), daughter of the Caliph's duplicitous second-in-command (Frank Puglia). But Ali falls in love with Amana and sets her free. When Amana is forced to marry Hulagu Khan, Ali and his followers go to her rescue, sneaking into the palace by hiding in huge oil jars. In the original story, these jars end up being the thieves' tombs; not so here, what with Ali Baba vanquishing his foes and claiming the heroine. Ali Baba and the Forty Thieves was remade in 1965 as Sword of Ali Baba, a film relying so much on stock footage from the earlier film that one of the Ali Baba actors, Frank Puglia, was hired to re-create his role.

Scotty Beckett
as Ali as a Child

Yvette Dugay
as Amara as a Girl

Charles Wagenheim
as Barber
View All

Critic Reviews for Ali Baba and the Forty Thieves

Audience Reviews for Ali Baba and the Forty Thieves

There are no featured audience reviews yet. Click the link below to see what others say about Ali Baba and the Forty Thieves!