Agatha Christie's Ten Little Indians (And Then There Were None) (1965) 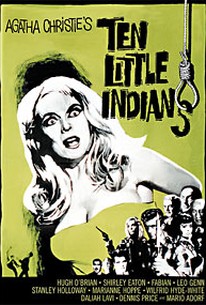 The third of many film and TV adaptations of the popular Agatha Christie novel And Then There Were None (Ten Little Indians is the title of the American edition, the hit play, and most of the movies), this 1965 version moves the action from a remote island to an isolated ski resort and otherwise rearranges the plot. The basic premise, however, remains the same. Ten strangers, eight of them guests and two of them servants, are lured to a dinner party and then trapped there to be killed one at a time by an unseen host who wishes to punish them for their disparate perceived crimes. The old nursery rhyme provides both the framing device, and, in the source material, the method of execution for each victim. In this version, however, the revised murder scenes include a hapless servant (Marianne Hoppe) falling to her death from a booby-trapped ski lift. Ten Little Indians features a varied cast that ranges from future Bond girls Shirley Eaton and Daliah Lavi to former teen idol Fabian and former Wyatt Earp TV star Hugh O'Brian. It also reunites My Fair Lady co-stars Stanley Holloway and Wilfrid Hyde-White. The film was the final directorial effort of George Pollock, who had previously helmed several adaptations of Christie's popular Miss Marple mysteries, starting with 1962's Murder, She Said. Christopher Lee makes an uncredited appearance as the recorded voice of absentee host/villain Mr. Owen. Despite its mountain setting, the picture was filmed in Ireland. ~ Brian J. Dillard, Rovi

...a capable if somewhat lackluster run-through.

Cheeky mid-60's take on a popular, if weathered, murder plot: 10 strangers meet in an isolated spot (here a mountain chalet) and one by one is murdered. Who can the killer be? A stranger? One of the 10? Kitschy fun if anything and filmed in glorious black and white.

Stylish but flawed 1960's adaptation of this Agatha Christie classic mystery, but it's adequate. The setting has been changed from an island to a snowy mountain lodge. The sex and violence are ramped up a few notches. The actors are a bit goofy and overacted in their roles. Fabian is a strange choice, but he was popular in 1965. The addition of silly servants to the plot is a bit unsuitable. Decent enough. I wish a colorized version was available.

I enjoyed this remake ALMOST as much as the earlier film, And Then There Were None, that inspired it. In fact, the two together would make a terrific double feature, contrasting the distinctly different eras of 1940s and 1960s cinema.

Okay filming of venerable old story, some of the performances are good, Hyde-White especially some very wooden.

Agatha Christie's Ten Little Indians (And Then There Were None) Quotes