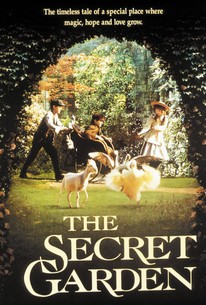 The 1993 remake of The Secret Garden is a rendition of the classic Frances Hodgon Burnett novel about a young girl (Kate Maberly) who discovers an abandoned garden on her uncle's large Victorian country estate, as well as an invalid cousin she didn't realize she had. With the help of a local boy, the girl sets out to restore the garden and, once it is blooming again, she discovers it has magical powers.

David Stoll
as Grandfather at Dock
View All

Critic Reviews for The Secret Garden

The result is an instant classic -- rich, dense, resonant, powerful.

While drawing superb performances from her young leads, Holland has masterfully contrasted the garden -- a place where melodic robins seem almost conversant -- with the dread of Misselthwaite.

The movie's dark themes, unhurried pace and talkiness make it something of a gamble for many children. But older children -- especially those who have been asking specific questions about death -- may find some nourishment in this garden.

Rather than a fresh breeze, it's the stale air of gilded calculation, the uncomfortable feeling that things are excessively "just so," that overhangs much that is genuinely appealing about this film.

It's as if the moviemakers were trying to cook up a New Age Yorkshire pudding, without meat drippings -- what's missing is Burnett's robust optimism and animistic energy.

Visually, The Secret Garden is enchanting. Working in English for the first time, with Francis Coppola as her executive producer, Agnieszka Holland conjures up a fairy-tale world of images...

The film has charm, without wandering into the realm of magic.

The film retains the gothic atmosphere of the book and looks amazing, thanks to Roger Deakins's scintillating photography. Stealing the show is Maggie Smith as beastly housekeeper Mrs Medlock.

That`s a more upscale marketing concept than Teenage Mutant Ninja Turtles, but it still doesn't make the movie any good.

Though it can get laborious, and produces the odd unintended chuckle, The Secret Garden is charming and sometimes chillingly authentic.

Any kids' movie that aims for something richer than the Saturday-matinee escapism of smiling whales and preschool ninjas -- that actually captures some of the mystery of childhood -- ought to be embraced. whatever its peculiarities.

Audience Reviews for The Secret Garden

When I was a kid everyone was always saying how fantastic this movie was, but I didn't think it was all that cool. It's an okay family movie, but it could be a lot better.

For a child's film, this is beautifully done. Rich colors, amazing mansion and fantastic acting on all parts. Especially Maggie Smith, naturally.