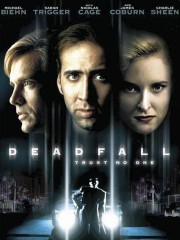 Possibly one of Nic Cage's most stellar performances (on a completely non-serious level, of course). The movie is absolutely ridiculous with Michael Biehn as the lead, and never loses steam through the twists and turns of absurdity. Worth checking out just for Cage's scattered coke-driven scenes. This'll be a new yearly tradition in my household with mandatory viewing for all.

Bryan S
½ October 21, 2016
Really hard to sit through. Nic Cage is the only redeeming quality.

Julian P
½ July 4, 2015
Enjoyable until Nicolas Cage gets the axe. He was the only reason why the film was enjoyable.

Sergey G
October 24, 2014
Overall the movie is terrible, but Nicolas cage does a great job playing the psychotic role (as he always does)

Kory A
September 22, 2014
There are 2 parts to this film. The main story and Nicolas Cage, the second saves it.

Harry W
January 14, 2014
Deadfall is a film from the lesser end of the Coppola family branch, far from the talents of Francis Ford Coppola and Sofia Coppola, but not as far away as Talia Shire or Nicolas Kim Coppola, also known as Nicolas Cage.
The only reason anybody nowadays would know of Deadfall or willingly put themselves through it would be because Nicolas Cage gives one of his most famous over-the-top performances ever, more so than in The Wicker Man or Vampire's Kiss. I know that's the reason I watched it, because whatever other appeal there may be harder to find than the Loch Ness monster.
Christopher Coppola proves what makes him an inexperienced director in Deadfall, because in what limited skill he has he prevents Deadfall from being creative in any real way or even well constructed.
The more major issue of the production is predominantly poor lighting, because everything is constantly too dark to see what's going on and it makes the film a negative visual experience. It just seems like Christopher Coppola just never used extra lighting on the film and relied on natural lighting which was never really that effective.
The cinematography isn't much better, because as well as being uncreative it's all very shaky and it zooms up to the wrong places at the wrong angles. It's usually too distant or too zoomed, never that good in either way.
The story is dumb, because it's senseless why Joe would have his father involved in a sting operation, and whatever the explanation is for it or for what the hell the sting is remains ambiguous. And from there it just becomes a generic and unintelligent crime drama which is empty of visual appeal with the exception of Sarah Trigger's breasts.
And the way the story is told is also lame. The decision to tell the story largely in a first-person narration is dumb because it seems like an attempt to be insightful into Joe's mind but it instead just seems like a generic and half assed attempt to go nowhere. The story gets confusing fast too, and eventually it's no longer worth following.
Plus, the script is bad anyway. It's just poorly written and packed with excessive swearing which Nicolas Cage manages to put to use.
Nicolas Cage seems to always be high on something in Deadfall. He begins high on weed since he's spaced out and weird, but he later becomes pretty coked out. When he's on weed his shortcomings as an actor are terrible, but when he's on coke his excessive ness as an actor is hilarious. He's never anything but over the top and way behind, and that's actually pretty hilarious. When he's over the top, he's extremely entertaining. He's at the best of his worst in Deadfall and his excessiveness is the one positive quality of the film, even though it's the aspect of a film that would usually be negative.
Michael Biehn tries his best but he falters under the poor direction of Christopher Coppola and fails to give it everything he could. He is pushed into terrible melodramatic territory and is just full of an awkward physicality which prevents him from doing much.
Sarah Trigger is largely inexperienced as an actress who doesn't do much put on a blank face and speak like a confused teenage girl. The only memorable things she did was take her shirt off and later marry Jon Cryer in real life. But neither of these save the film.
Talia Shire doesn't really do much either.
Charlie Sheen is made to look like a sophisticated and intelligent wiseguy in Deadfall, but the lazy script lines he is stuck with which he delivers without any effort make it seem like he's only there as a favour to the Coppola family without paying credibility to himself as an actor.
Lastly, James Coburn is a presence and nothing more. But an actor of his talent deserves to be more. Deadfall won't give him that chance.

So Deadfall is merely a poor quality and poorly constructed film with the best of Nicolas Cage's worst and nothing else.

Matthew C
½ December 6, 2013
There's nothing like seeing the one true god, Nicolas Cage, tripping balls and dry-humping a mattress.

Nic Cage gives a truly memorable performance as the psychotic, coke-snorting Eddie. His acting here really needs to be seen to be understood. He has some weird low voice at the start, but quickly begins yelling profanity and hilarious lines like "HI FUCKING YA!" as he karate chops some random man who told him to "watch out" when Eddie drunkenly walks into him as he's leaving a tittie bar. There are so many great quotes in this movie. I recommend you search Youtube for clips of his Caggiest Deadfall moments. But unfortunately, his character gets his face deep fried an hour into the film, leaving roughly half an hour left. This is my major problem.

Cage is both the heart and soul of Deadfall. Without him, we are left with a boring, one dimensional protagonist and a lame plot with one of the stupidest twists ever. Not even Charlie Sheen, who has a small role near the end of the film, provided any real entertainment value. If only Eddie was the film's protagonist, this film would be amazing.

There isn't a whole lot to say about Deadfall. The acting is bad(apart from Cage), the writing is abysmal(except Cage's dialogue, but that's probably due to his delivery), and the film lacks any kind of excitement(again, 'cept when Cage is on screen) and tension. The climatic scene of the final con is dull and suspense free. Most likely because I didn't give a shit about the characters.

Deadfall's tone is uneven. Is this supposed to be a noir-ish crime thriller? Or a goofy black comedy? Cage's performance suggest the latter, but there are other scenes without his presence that seem to be comedic in nature, but end up falling flat because they just aren't funny. It's a strange movie, but not always in a good way. And you can probably guess who's at the center of the good parts...

Cage earns this film a 4/10. Everything else totally sucks. But it could be a fun movie to watch with some buddies who are ready to trash a bad movie, and laugh at one of Cage's best roles.

Jacob I
August 17, 2013
As much as I like Nicolas Cage's over the top performance, the movie itself is just bland and really hard to sit through.

Joseph C
½ June 18, 2013
A film that I think could survive on the raw energy of Nicolas cage's outstanding over the top enjoyable acting. Which is why I was disappointed he didn't have as large of a part in the film as I would have wanted him to have had. I think the films narrative is quite good but I think they lost it completely towards the end.

Michael S. Y
½ May 29, 2013
Nicholas Cage is fucking hysterical and defines the term 'random', the plot however can never really distinguish itself between a drama, thriller or comedy... It's a strange film that you should only get for Cage's scenes...

Ryan N
½ March 21, 2013
The only reason I am giving this even half of a star is because of Nicolas Cage's unintentionally hilarious performance. I had never even heard of this movies existence until I saw the YouTube video "Nicolas Cage Losing His Shit", and him in this movie made up a good part of that video. So I just had to see the film for myself. Luckily I got to see it for free, because otherwise the scenes put in the YouTube video would have sufficed.

Allen G
February 19, 2013
This is a terrible film, terrible script and much of it is simply a bore to sit through BUT...

Nicolas Cage is in this film and while the script may suit many of his recent, quite terrible films, *bangkok dangerous *cough* *next* *cough*, this is vintage Nicolas Cage. Cage's portrayal of Eddie is nothing short of outstanding, whether you are a Cage fan or not, you cannot deny that this performance is a special one.

Is it the kind of touching and thoughtful acting that we see in films like Leaving Las Vegas or Adaptation? of course not, it's acting taken to the most absurd and unrelenting levels. The result of this is hilarity beyond belief- the Wickerman remake has gained online notoriety for Cage's performance which I personally found hilarious but many simply found it stale and punishing like the rest of the film. Note now though that the intensity of Cage's performance in Deadfall far surpasses that of in The Wickerman- you will either find it funnier than you could ever imagine or to you it will just be so foreign and strange that you cannot accept it.

If the latter is the case then I guess watching Deadfall would just be a confusing and tiring experience but if, like me, you indeed see the comedic side to Cage's performance (trust me, it's right there in your face) then this film is a beautiful one. Every terrible scene is worth watching in the hope that Nicolas Cage's character will make an appearance and everytime he does it does not disappoint.

Deadfall is essentially a piece of comedic genius on Cage's part and sheer horridness in every other. In my opinion the comedy is such that it vastly outdoes the rest of the film. This is a film for Nicolas Cage fans, people with small expectations going in & I suppose you could say people with a somewhat obscure sense of humour.

In giving Deadfall a rating I had to ask myself- does it's existence make the world a better place or a worse one? The sheer joy it has given me through Cage's performance tells me that it is the first of those options and so it get's a fresh rating. Terrible film though.