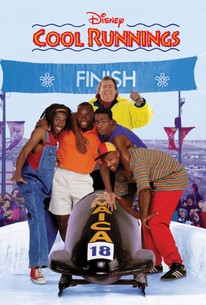 Cool Runnings fictionalizes the true story of a bobsledding team from Jamaica making it to the Olympics. The tale begins when Derice Bannock (Leon), realizing that due to an accident his chances of qualifying for Jamaica's 1988 Olympic track team are dashed, scrounges around looking for another sport for the competition. Since ex-United States gold medal bobsledding winner Irv Blitzer (John Candy) now lives in Jamaica, Derice chooses bobsledding, convincing Irv to coach the team. Derice then forms his team. He gets his friend Sanka Cofie (Doug E. Doug) to join up and recruits Junior Bevil (Rawle D. Lewis), a young man who lacks self-confidence, and Yul Brenner (Malik Yoba), a disagreeable and bitter malcontent. After setbacks and near disasters, the group jells as team members and they head off to the Olympics to compete for an Olympic spot.

[A] sweet-natured, high-spirited comedy, that rare movie that plays effectively to all ages.

Cheesy? Certainly. But strong performaces and a heart-warming storyline make this a winner.

Though it certainly has faults, which only the extremely nostalgic could ignore, the film bests its contemporaries through its ability to unite childlike comedy and adult concerns without ever obscuring one with the other.

Cool Runnings is a charming tale of determined underdogs, with plenty of laughs, moments of real tension, and five engaging performances.

The offbeat, fact-based saga is enlivened by the perfect balance of humor, emotion and insight and should be one of the true sleepers among fall box office releases.

Travelogue shots of happy Jamaicans dancing in the sun give way to patronising comedy.

A brightly optimistic and warmly funny comedy, with solid performances and a no-nonsense visual approach that emphasises story over spectacle.

Admittedly, it's a little predictable and patronising at times, but the eager performances of John Candy and his charges carry the day.

The performances are fun, and director John Turtletaub gets those fateful final moments right, leaving us with a triumphant, entertaining story of Winter Olympic glory.

While far from the best of Ritchie's portrayals of winning and losing (Downhill Racer, The Bad News Bears), Cool Runnings goes uphill, rather than down, and moves from bad news to good.

Cool Runnings is a very good comedy about a Jamaican Bob Sled team. This is a well made comedy with lots of laughs, a decent cast, and of course the brilliance of John Candy. There are plenty of good things to enjoy about this film, and it surprised me quite a bit. Cool Runnings is lots of fun, and is one of the better underdog comedies out there. The film is not perfect, however it's very entertaining. The film has a good cast, and has a very original idea for its plot. The film funny, and the cast do a good job at delivering the laughs. John Candy one of his last performances here, as this was one of three final films he starred in before he died. Candy as usual shines here, and delivers a good performance. This is a very good comedy that is simply lots of fun. The performances are good, the story is interesting and the laughs are plentiful. I enjoyed this film more that your regular sports comedy, and at times Cool Runnings manages to be better than most sports comedies. This film is a classic of sports comedies, and should get more recognition. This is a good film to watch with friends, and you're guaranteed plenty of laughs. John Candy is great here, and his performance alone makes this film worth seeing. Cool Runnings is a childhood favorite of mine, and is a film worth seeing. The films plot may seem a tad ridiculous, but it's totally worth watching. A fun filled comedy that will make you laugh.

"Cool Runnings" is a film that shouldn't be good, but is. It isn't a masterpiece, it doesn't excel in any particular technique of filmmaking, nor is the acting the greatest, or the directing impossible to repeat. Yet, it is a film that makes you feel, in many different ways. Telling the story of the first Jamaican bobsled team, and starring John Candy, Leon, Doug E.Doug and others, the film delivers a compelling, emotional, story that inspires at the same time. As I said earlier, technical aspects or acting/directing aspects, aren't the best. They don't make the film what it is. What makes the film is the brilliant, and also true, story behind it. The underdogs, a Jamaican bobsled team, it all seems ridiculous. You hate the characters at the beginning, they managed to irritate me in many different ways, but by the end, you have made friends and you're rooting more than any of the crowds that probably did watch the event live. A family favourite, it can cheer you up no matter what, as you find your hairs standing on end and a tear forming in your eye by the end of this little, un-important, yet great film. ***' 3 & A Half Star

John Candy always makes me laugh even in this Disney flick.