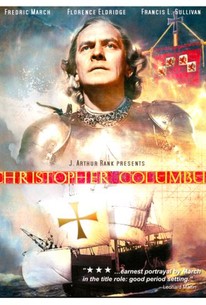 Reverent to the point of tedium, Christopher Columbus stars Fredric March in the title role, and he's welcome to it. March's wife Florence Eldredge co-stars as Queen Isabella, who finances Columbus' expedition to find a westward route to India. After several reels devoted to table-top miniatures impersonating the Nina, the Pinta and the Santa Maria (punctuated by rumbles of mutiny--no, not "rumble rumble, mutiny mutiny") Columbus reaches the New World. Though obviously filmed on an extravagant budget (Technicolor was still a rare commodity in 1949), the British Christopher Columbus has less going for it than the 1939 Porky Pig cartoon Christopher Columbus Jr.. Filmgoers stayed away in droves, as they would when the movie industry "rediscovered" Columbus for a brace of disastrous multimillion-dollar films in 1992.

Stuart Lindsell
as Prior
View All

Too much of the film deals with the dull court machinations, leaving the actual discovery with little punch.