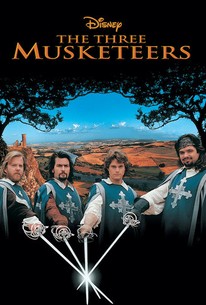 Critics Consensus: Its starry trio of do-gooders may promise to fight "one for all, all for one," but this Three Musketeers is a slickly unmemorable update bound to satisfy very few.

Critics Consensus: Its starry trio of do-gooders may promise to fight "one for all, all for one," but this Three Musketeers is a slickly unmemorable update bound to satisfy very few.

Critic Consensus: Its starry trio of do-gooders may promise to fight "one for all, all for one," but this Three Musketeers is a slickly unmemorable update bound to satisfy very few.

Starring Keifer Sutherland, Charlie Sheen and Oliver Platt as the title characters, Stephen Herek's The Three Musketeers tinkers with the classic Dumas story of a country boy (Chris O'Donnell) who persuades the musketeers to let him join them in their attempt to overthrow Cardinal Richelieu's (Tim Curry) scheme to form an alliance between France and Great Britain. This time around, the story is told as a '90s adventure film, filled with slick photography, fast-paced story-telling and wall-to-wall action.

Herbert Fux
as Innkeeper
View All

News & Interviews for The Three Musketeers

New Stills And Poster For "A Scanner Darkly"!
Critical Consensus: "Zorro" Off The Mark, "Saw II" A Little Rusty

View All The Three Musketeers News

All this nonsense would be news to Dumas, whose grave is surely spinning as his musketeers - sucked dry of high drama and low wit - go kicking and screaming into the wonderful world of Disney.

[A] sound adaptation of the famous tale, hewing closely to the story and its buddy aspect.

Those who have never seen a previous "Musketeers" adaptation or a truly exciting Hollywood adventure in the grand style may be swept along, but the mechanical, paint-by-numbers feel of this outing is too evident to ignore.

Conceived frankly as a product, complete with hit-to-be theme song over the closing credits, this adventure film cares less about storytelling than about keeping the Musketeers' feathered hats on straight whenever they go galloping.

It has the main characters and a hint of the idea but it's all go-to-hell fun from there.

Even with all the leggings and horses and medieval gear, Walt Disney's "The Three Musketeers" looks more like a beach-party movie than an adaptation of a beloved classic.

What "The Three Musketeers" lacks in poeticism, it makes up for in entertainment value, at least.

Rewatch the Lester film or even the Ritz Bros.

A fun adventure, but nothing new. Average retelling of the legend. Platt steals the show.

A stupid, bumbling misfire, which wastes a solid cast.

At times, feeling like a spoof of the whole idea, while also paying a very enjoyable tribute to the charatcters and what is supposed to happen to them. Of course it changes many plot lines from the original stories, some for good and some that fall apart, but it is a very fun movie from start to finish. As young D'Artagnan is on a mission to become a musketeer, he becomes faithful to his musketeer friends and fights along side them throughout the film. It may not have the heart, or genius cheesiness that the 1948 version had, but it wasn't really a masterpiece to begin with. These films are really just popcorn entertainment, and that is why I enjoyed this film. The acting is funny, the story is decently told, action is much improved, but the dialogue still remains cheesy. If you haven't been a fan of the original tales, books, or plays, then you definitely will not find yourself impressed by this picture, but I however am, and I had a lot of fun.

One of the staples of my childhood, this movie is still really awesome though. Sure it's a little corny and it makes no sense that everyone has either American accents or outrageous French ones, but it doesn't matter when you have such a dynamite plot, visuals and characters. Chris O'Donnell is overly earnest as D'Artagnan, but that's kind've why it's such a charming character. Kiefer Sutherland, OLiver Platt and Charlie Sheen are extremely bizarre in their roles, but I really don't see it being anything else. Where the movie truly excels is with it's diabolical villains. Tim Curry is too openly evil and perverted as the Cardinal and proves to be one of the most entertaining onscreen villains. Michael Wincott equally personifies evil as Roachfort, but he's just really flat out cool. To top everything off, this has one of the greatest theme songs known to mankind. "All for Love", performed by Sting, Rod Stewart and Brian Adams is a ballad for the centuries.