Snow White and the Seven Dwarfs1937 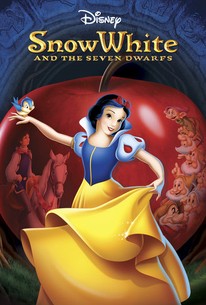 Critics Consensus: With its involving story and characters, vibrant art, and memorable songs, Snow White and the Seven Dwarfs set the animation standard for decades to come.

Critics Consensus: With its involving story and characters, vibrant art, and memorable songs, Snow White and the Seven Dwarfs set the animation standard for decades to come.

Critic Consensus: With its involving story and characters, vibrant art, and memorable songs, Snow White and the Seven Dwarfs set the animation standard for decades to come.

It was called "Disney's Folly." Who on earth would want to sit still for 90 minutes to watch an animated cartoon? And why pick a well-worn Grimm's Fairy Tale that every schoolkid knows? But Walt Disney seemed to thrive on projects which a lesser man might have written off as "stupid" or "impossible". Investing three years, $1,500,000, and the combined talents of 570 artists into Snow White and the Seven Dwarfs, Disney produced a film that was not only acknowledged a classic from the outset, but also earned 8,500,000 depression-era dollars in gross rentals. Bypassing early temptations to transform the heroine Snow White into a plump Betty Boop type or a woebegone ZaSu Pitts lookalike, the Disney staffers wisely made radical differentiations between the "straight" and "funny" characters in the story. Thus, Snow White and Prince Charming moved and were drawn realistically, while the Seven Dwarfs were rendered in the rounded, caricatured manner of Disney's short-subject characters. In this way, the serious elements of the story could be propelled forward in a believable enough manner to grab the adult viewers, while the dwarfs provided enough comic and musical hijinks to keep the kids happy. It is a tribute to the genius of the Disney formula that the dramatic and comic elements were strong enough to please both demographic groups. Like any showman, Disney knew the value of genuine horror in maintaining audience interest: accordingly, the Wicked Queen, whose jealousy of Snow White's beauty motivates the story, is a thoroughly fearsome creature even before she transforms herself into an ancient crone. Best of all, Snow White clicks in the three areas in which Disney had always proven superiority over his rivals: Solid story values (any sequence that threatened to slow down the plotline was ruthlessly jettisoned, no matter how much time and money had been spent), vivid etched characterizations (it would have been easier to have all the Dwarfs walk, talk and act alike: thank heaven that Disney never opted for "easy"), and instantly memorable songs (Frank Churchill, Leigh Harline, Paul J. Smith and the entire studio music department was Oscar-nominated for such standards-to-be as "Whistle While You Work" and "Some Day My Prince Will Come").

News & Interviews for Snow White and the Seven Dwarfs

View All Snow White and the Seven Dwarfs News

Critic Reviews for Snow White and the Seven Dwarfs

The film is as charming as it is novel in conception and execution and it is so bound to appeal as strongly to grown-ups as to youngsters.

To say of Snow White and the Seven Dwarfs that it is among the genuine artistic achievements of this country takes no great daring.

It is Snow White's afterbirth that merits both canonization and destruction.

Largely it succeeds because it really is a great deal of fun.

In addition to its historical value as the first animated feature, it is still a delight, with memorable songs and characters.

So perfect is the illusion, so tender the romance and fantasy, so emotional are certain portions when the acting of the characters strikes a depth comparable to the sincerity of human players, that the film approaches real greatness.

Yes, it's a technological triumph of its era, but the supply of character development and plot are as short as the dwarfs themselves.

The film may not possess the emotional impact of Disney's later animated classics, but it's nevertheless a fascinating historical milestone in animation.

Good, but should have been better...

Snow White and the Seven Dwarves is undeniably a watershed in animation and a truly classic film. How he adapted the story is a topic that has been critiqued and debated with almost as much passion as the original folktale.

Kids will like the film most because of the Dwarfs' hilarious antics. Grown-ups because they will think they're kids again.

Walt Disney, without losing any of the story's fairy-tale quality, has made it into a picture that can turn the most casehardened adult into a wide-eyed four-year-old.

Audience Reviews for Snow White and the Seven Dwarfs

Walt Disney's first animation is an enchanting and delightful adaptation of Grimms' fairy tale. Carefully drawn, with a great attention to details, it not only opened the door for this art in cinema but every modern animation owes a lot to this important masterpiece.

Ranked 34 on AFI's top 100 movies of all time, and considered the Disney Animated feature film. "Snow White and the Seven Dwarfs" is an all time classic movie. Fantastic animation,catchy songs,and memorable characters make this cartoon truly timeless. It's the fairy tell told with beauty and charm,that has never been often imitated,never duplicated. I remember loving this as a child,and rewatching it brought back many memories and lots of whistling. I still sing "hi ho, hi ho it's off to work I go" some mornings. The dwarfs are 7 of the simplest,yet most effective characters ever in an animated film. Dopey barely makes a peep,and 75 years later he is still loved. Hard to believe this came out 75 years ago, but it holds up beautifully. I remember a couple years ago this was on tv, and I was with my nephew. He's used to the cartoons now like "shrek" and "toy story." But he stopped and watched and loved it. Even got a little scared during the scenes of the forest. It's just awesome to see a new generation fall in love with this,like each before it. Can't wait til my boy is old enough so I can share it with him.