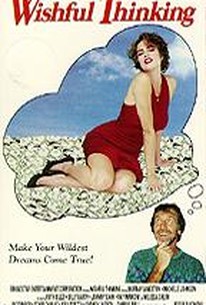 Poor Michael Moore is one messed-up screenwriter who is more depressed than usual when his girl friend abruptly dumps him. His life forever changes when he saves a diminutive old man from street thugs. The little man has magical powers and as a reward for Michael's kindness gives him a notepad. This is no ordinary pad for anything Michael writes upon it will come true. This comedy-adventure follows what happens when the writer begins to use it. First he scrawls his wish that the lovely bank teller Diane Jacobs will enter his life. Unfortunately, he should have been clearer for they meet after they are both abducted by bank robbers. Fortunately, Mike has his trusty pad and they get out of the situation. Next he makes the mistake of telling his avaricious sister Jody about the magic pad. Wanting all of the family fortune for herself, she promptly plans on getting him declared insane. A trip to the courtroom ensues.

There are no critic reviews yet for Wishful Thinking. Keep checking Rotten Tomatoes for updates!

There are no featured reviews for Wishful Thinking at this time.