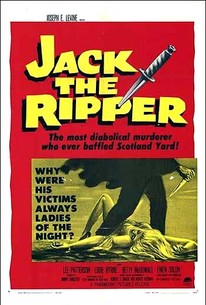 Suspenseful, interesting, and macabre, this period piece by Robert S. Baker overcomes a weakness in characterization by sheer dint of storyline and action. Jack the Ripper still remains the unidentified killer of at least three, probably five, and possibly even eight prostitutes living or working in London's East End in 1888. The murders occurred in August, September, and November of that year and were never solved. Because various internal organs of the dead victims (their throats were cut after they were strangled into unconsciousness) were removed rapidly and with an accurate surgical technique, investigators have postulated that the demented serial killer was a surgeon. In this cinematic version, the murders are shown as they happened while Inspector O'Neill (Eddie Byrne), along with an American detective Sam Lowry (Lee Patterson) try to track down suspects and prevent the next killing. The theory put forward here is that Jack the Ripper was looking for one particular woman. As the tension mounts, his suggested identity -- and what happened to him -- is revealed. ~ Eleanor Mannikka, Rovi

Critic Reviews for Jack the Ripper

One of the finest Ripper films to date.

This is an essential piece of Ripperphilia on film and just an all-around killer bit of sordid period-piece horror.

Audience Reviews for Jack the Ripper

There are no featured audience reviews yet. Click the link below to see what others say about Jack the Ripper!