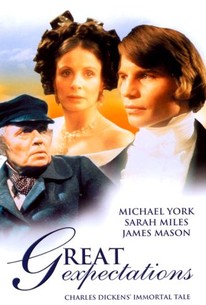 This third talking-picture version of Charles Dickens' novel Great Expectations stars Michael York as Pip, the humble British lad whose aspirations to become a gentleman are financed by a mysterious benefactor. We first see young Pip (played by Simon Gipps-Kent) coming to the aid of escaped convict Magwitch (James Mason). Once this episode has apparently run its course, we find Pip the guest of the wealthy, reclusive, half-mad Miss Havisham (Margaret Leighton), and the worshipper-from-afar of Havisham's snooty niece Estella (played as both a teenager and an adult by Sarah Miles--breaking the usual cinematic tradition of casting two actresses in the role). This brief exposure to the finer things in life leads Pip on the winding road to betterment, with a few surprises in store for him. Great Expectations premiered November 22, 1974, as a Bell System Family Theatre presentation.

Simon Gipps-Kent
as Pip, as a Boy

Richard Beaumont
as Pocket, as a Boy

There are no critic reviews yet for Great Expectations. Keep checking Rotten Tomatoes for updates!

Good acting from York, but other than that, I didn't care for this movie. It's slow and boring and predictable. The book is probably better.