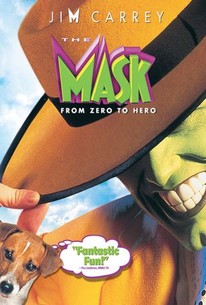 Hyperactive mayhem results when a mild-manned banker discovers an ancient mask that transforms him into a zany prankster with superhuman powers in this special-effects-intensive comedy. The wildly improvisational Jim Carrey plays Stanley Ipkiss, a decent-hearted but socially awkward guy who one night finds a strange mask. Carrey's trademark energy reveals itself after Stanley puts on the mask and the banker transforms into The Mask, a green-skinned, zoot-suited fireball. The rubber-faced Mask possesses the courage to do the wild, fun things that Stanley fears, including romancing Tina Carlyle (Cameron Diaz). In addition to Carrey's physical talents, the film makes effective use of digital visual effects that bestow the Mask with superhuman speed, insane flexibility, and popping eyes out of a Tex Avery cartoon. The larger narrative, involving the efforts of Tina's gangster boyfriend to destroy Stanley and use the mask's powers for evil, prove less interesting than the anarchic comic set pieces, including a particularly memorable dance number to "Cuban Pete." The film delivered enough laughs to become a surprise hit and, along with the same year's Dumb and Dumber, establish Carrey's status as a comedy superstar. ~ Judd Blaise, Rovi

Christopher Darga
as Paramedic No. 3

Robert O'Reilly
as The Figure

Jeremy Roberts
as Bobby the Bouncer

Wendy Walsh
as Herself

Tim Bagley
as Irv
View All

Critic Reviews for The Mask

When his face turns green and his limbs get limber, Carrey's pretty much unstoppable. This cartoon-y creation is an amazing fusion of physical comedy and state-of-the- art cinema illusion.

The gangland plot is flimsy (bad guy Peter Greene wears too much eyeliner), and the jokes are erratic, but it's a far better showcase for Carrey's comic-from-Uranus talent than Ace Ventura.

Carrey and his aggressive overbite are back, but this time he's better used as an ingredient instead of as the plot.

If a movie star was born in Ace Ventura, he is christened in The Mask. Quite simply, this is the best and freest crazy comedy to come along since Beetlejuice.

Not only is he adept at physical humor, the kind of knockabout stuff that recalls the classic silent clowns, but Carrey also has a bright and likable screen presence, a lost puppy quality that is surprisingly endearing.

Carrey now has the clout to find a vehicle worthy of his hyperactive gooniness. When he does, we'll see if he's truly a jester for our time or simply the moron of the moment.

What an absolutely perfect role for the out-of-control, rubber-faced Jim Carrey, giving him purpose and plot that allows him to go as overboard as he wants.

Carrey may be the finest comic to come along since Robin Williams.

Adults should also be advised that the previews show most of the good effects, and are 100 minutes shorter.

Carrey, the star of the surprising hit Ace Ventura: Pet Detective and a regular on TV's In Living Color, acquits himself well in a part of sublime goofiness.

...a kind of Roger Rabbit on steroids that still holds up well after all these years.

Audience Reviews for The Mask

Glued together by an outlandish yet revered performance from Jim Carrey, The Mask utilizes the best out of its playful & animated vibe to shroud away obvious hiccups and focus on the hysteria of its wild, green-faced titular craze. 4.4/5

Carrey could've done a lot better in this film

truly enjoy this film. It isn't the best movie ever or anything like that but it is still a hugely enjoyable comedy in my opinion. And I also think that along with Liar Liar and The Truman Show that The Mask is one of Jim Carrey's better movies. Here Carrey's role is split, his mild mannered banker and a wild, crazy superhero. Either way, he excels in this film, he is completely in his element and completely unpredictable. He is helped by the special effects, which are utterly amazing, a truly imaginative and sophisticated visual style that worked so well here. Here because of the special effects, Carrey moves around at whirlwind speed, pops his eyeballs and swaps parts of his anatomy for his cartoon equivalents and you know what it is jolly funny. There are so many good scenes though my favourite was the Bugs Bunny-style Cuban Pete routine. Also superb are the script, which is as funny and as imaginative as the film itself and the suitably tongue in cheek music score. Not to mention the adorable pet dog, underrated Peter Reigert, Peter Greene's Dorian and gorgeous Cameron Diaz. Overall, hugely enjoyable, funny and imaginative, 3 Stars 4/2001 (Updated)

One of my fave Jim Carrey films. Very funny and good animation for the mask. One of Cameron Diaz earliest films. Re-watched recently, starting to look a bit dated now and comic book humour losing it's charm now.