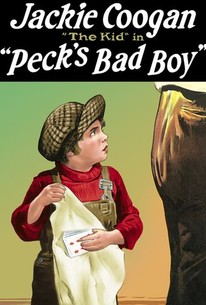 After his appearance in The Kid, little Jackie Coogan was obviously destined for stardom. For his first starring role, he was given this story written by George W. Peck, which had been made into a stage play by George M. Cohan. While the film didn't live up to the stage version (Moving Picture World said comparing the two "is to compare a two-dollar straw hat to an expensive Panama"), Coogan does have excellent support. Sam Wood directed the picture and the titles were written by Irvin S. Cobb. Young Henry Peck (Coogan) is a troublemaker -- the film begins with him opening the lion's cage at a circus and giving the whole town a scare. Although his father (James Corrigan) refuses to let him attend the circus as punishment, Henry manages to manipulate him into allowing him to go anyway. But his antics don't stop -- he puts ants in his father's "pleurisy pad" and causes a commotion at church. He gets his sister's boyfriend (Wheeler Oakman) into trouble. The boyfriend, however, executes a daring rescue at the end and, as a result, becomes Henry's pal for life.

Wheeler Oakman
as Man in the Case

Doris May
as Girl in the Case

Raymond Hatton
as The Grocer

Queenie the Dog
as Herself
View All

Peck's Bad Boy is vastly amusing, and it has its moments of excitement.

It may be argued that Jackie Coogan is more realistically human in Peck's Bad Boy than he was in The Kid, but we can hardly consider that as a cause for congratulation. We hate to have our ideals shattered.

It is a rare acting talent and a lovable personality that Jackie Coogan brings to the screen. But his directors will be hard put to it to find stories to fit him.

We cannot enjoy characters in a play unless they have a counterpart in real life and surely no five-year-old boy ever was like this one.

There are no featured reviews for Peck's Bad Boy at this time.