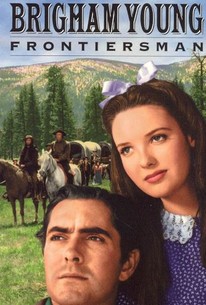 Inspired by the true story of the leader of the Mormon Church, this film features Dean Jagger in the title role. The members of the Church of Latter Day Saints are subjected to religious persecution by the people of Nauvoo, Illinois, where they've settled; so under the leadership of Brigham Young, the Mormons head west, facing tremendous adversity along the way. However, a gravely ill Young has a prophetic dream in which he sees what he believes is his people's promised land, where they will be allowed to live and worship as they see fit. Soon they discover the land Young saw in his dream -- Salt Lake City, Utah. Young and his followers settle there, but their hardship does not end soon. The first winter in Utah is cruel, and while the spring brings the promises of a bountiful planting season, soon a plague of locusts appears, threatening to devour the crops the settlers have just planted. A huge flock of seagulls arrives to save the day by consuming the insects. Tyrone Power and Linda Darnell play a pair of settlers who fall in love in the course of the journey. Brigham Young downplays the more controversial aspects of the Mormon church (particularly polygamy) in favor of portraying Young as a trail-blazing man of the land; in some markets, the film was shown as Brigham Young, Frontiersman.

Charles B. Middleton
as Henchman

There are no critic reviews yet for Brigham Young. Keep checking Rotten Tomatoes for updates!

Dunderheaded junk about the beginnings of Mormonism.

I heard Vincent Price was in this movie, so I wanted to see it, but (this isn't a spoiler) he dies in the beginning of the movie! I was so disappointed. Then, this movie seems to be an advertisement for the Mormon church or something, but without telling of their more radical beliefs. This movie just skims the surface, and it doesn't even do a good job of that.