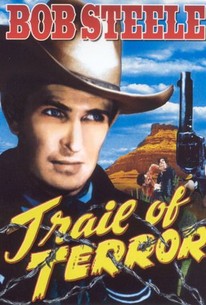 Nobody is what he (or she) appears to be in this above-average western starring Bob Steele and directed by his father, Robert North Bradbury. Searching for the whereabouts of a strongbox lost in a stage hold-up, government agent Jim Wilson (Steele) goes undercover as a prison inmate. The ploy works and with fellow agent June O'Day (Nancy DeShon), a "paroled" Jim is soon headed for the last location of the stage robbers. Impersonating Spike Manning, Jim learns that the leader of the gang is actually Blake (Charles King), a Wells Fargo agent operating under the alias of "Hashknife." Enter Muggs (Richard Cramer, a former prison inmate who knows Jim's true identity.

Critic Reviews for Trail of Terror

There are no critic reviews yet for Trail of Terror. Keep checking Rotten Tomatoes for updates!

There are no featured reviews for Trail of Terror at this time.