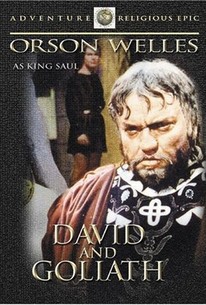 Very loosely based on its Biblical source, this standard Italian sword-and-sandal action film stars Orson Welles as an intense, inward-turning King Saul, deteriorating at the same time that David is rising in renown. The shepherd David (Ivo Payer) is sent to the Israelite forces with supplies for his older brothers when he first discovers who Goliath is -- the giant over nine feet tall that challenges any single warrior to meet him one-on-one in battle. If someone takes up his challenge, it would decide whether the Israelites or Philistines are victorious in their current stand-off. David's one-shot victory turns the tide and hastens Saul's decline. The monarch's lithesome daughters Merab and Michal are played by Eleonora Rossi-Drago and Giulia Rubini, his son Jonathan is portrayed by Pierre Cressoy, and Goliath by Kronos, a muscular "giant" of European circus and music hall circuits.

Critic Reviews for David and Goliath

Where are the Philistines when you really need them?

Audience Reviews for David and Goliath

There are no featured audience reviews yet. Click the link below to see what others say about David and Goliath!