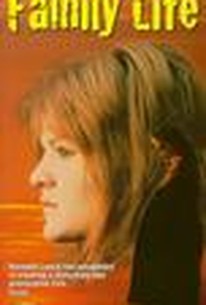 Released in England as Wednesday's Child, this earnest socially conscious drama explores the generation-gap between a pair of overbearing, strict parents and their rebellious, pregnant daughter Sandy Ratcliff. First they force her to get an abortion. Then mom and dad further exert their power over Ratcliff by locking her out of the house until she ceases her troublesome ways. When this fails to "tame" the girl, the parents force her into psychiatric treatment. Subjected to shock therapy, Sandy ends up a shell of a human being, little more than a case study for those who've robbed her of her individuality. Shot in documentary fashion, Family Life won a prize at the 1972 Berlin Film Festival. ~ Hal Erickson, Rovi

Director Ken Loach has succeeded in creating a disturbing and provocative film.

Family Life is a lot more 'real' than the overrated Kes; but a film which has prejudice as its theme doesn't gain from playing on the prejudices of its audience.

Family Life continues Loach's examination of class exploitation, and because its purpose and function are clearer than Poor Cow or even Kes, it's arguably a better film, even if remaining limited by its TV-derived visual puritanism.

Has something urgent to say.

There are no featured reviews for Family Life at this time.