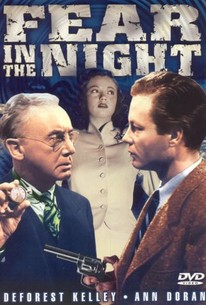 Fear in the Night Photos

One of several low-budget mellers directed by scriptwriter Maxwell Shane, Fear in the Night was based on the short story Nightmare by William Irish (pseudonym for Cornell Woolrich). In his first starring role, DeForest Kelley plays Vince Grayson, a young man who has a terrible nightmare wherein he sees himself killing someone. When he awakens, Vince finds a couple of pieces of evidence indicating that his dream was no dream. Detective Cliff Herlihy (Paul Kelly) doesn't believe that Vince has killed anyone, but agrees to investigate. While taking shelter from a storm in a remote mansion, the detective and the young man stumble upon a mirrored room -- just like the one in Vince's dream. The frenzied Vince is nearly driven to suicide, but Detective Herlihy deduces that his friend's nightmare was the handiwork of Lewis Belnap (Robert Emmett Keane), the mansion's owner, who is a dabbler in hypnosis. Fear in the Night was remade in 1956 as Nightmare, with Kevin McCarthy and Edward G. Robinson. ~ Hal Erickson, Rovi

Critic Reviews for Fear in the Night

Its shortcomings, most of which arise from it not having aged particularly well, are ultimately offset by its ethereality.

Audience Reviews for Fear in the Night

A man awakes after a dream of murdering a stranger only to find actual evidence of the deed on his person. Was it only a dream or did he kill someone? DeForrest Kelley in his first lead role is pretty good as a guy losing his grip in this noir- ish thriller from the late 40's.

Did DeForest Kelley/Dr. "Bones" McCoy kill someone? He's not sure if it was a dream or reality. It was interesting to see Kelley in an older movie, but the movie isn't that great itself. It's just okay.

Fear in the Night Quotes