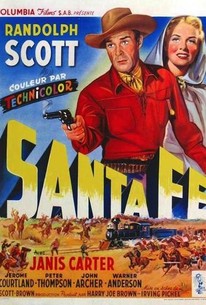 This western centers on the exploits of four brothers who return from the Civil War. Three of the siblings decide to become outlaws while the fourth, a former Confederate soldier, heads West and begins working for the Santa Fe railroad. Though the three have become bandits, they refuse to rob Yankee businesses and instead get tangled up with a gambler and his gang who gradually convince the brothers to help him rob the train. Guns blaze, train whistles scream, and justice ensues.

Merrill McCormack
as Townsman
View All

Rousing but charmless western is set soon after the Civil War.

There are no featured audience reviews yet. Click the link below to see what others say about Santa Fe!