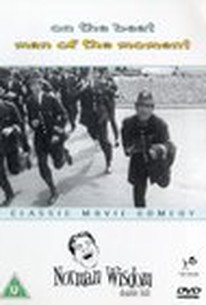 On the Beat Photos

One's enjoyment of On the Beat rests solely upon one's tolerance of British comedian Norman Wisdom, who can be described as a Jerry Lewis without the discipline. Wisdom plays a Scotland Yard parking attendant who seemingly can't draw breath without breaking something or knocking someone down. He wants to become a detective, but the Yard isn't quite ready for such a catastrophe. He proves his worth--and wreaks more havoc--by going undercover and trapping a gang of jewel thieves. The slapstick is serviceable in On the Beat; as for the "serious" moments, Wisdom's notion of pathos is to scream at the top of his lungs. You may want to join him. ~ Hal Erickson, Rovi

Lionel Murton
as Man in Train

Critic Reviews for On the Beat

Norman Wisdom was sort of England's Jerry Lewis. That says it all

There are no featured reviews for On the Beat at this time.

On the Beat Quotes