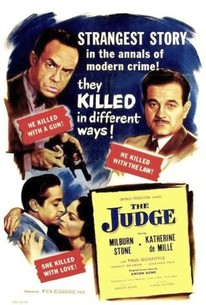 The terrible consequences of perverting the legal system are spelled out in The Judge. In one of his rare starring roles, Milburn Stone plays criminal lawyer Martin Strang. Suspecting his wife Lucille (Katherine de Mille) of infidelity, Strang schemes to have her put out of the way. He wangles a not-guilty verdict for murderer William Jackson (Paul Guilfoyle), then blackmails Jackson into participating in his plan to punish Lucille. Things don't quite go off as expected, and before long several lives are needlessly destroyed. The title character of The Judge, played by Jonathan Hale, relates the sordid goings-on in flashback form. Two future "regulars" of the Superman TV series, John Hamilton and Herb Vigran, show up in minor roles.

Bob Jellison
as Clerk
View All

Critic Reviews for The Judge

The performers seem to be lifeless except for Milburn Stone.

Audience Reviews for The Judge

There are no featured audience reviews yet. Click the link below to see what others say about The Judge!