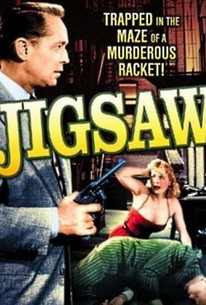 Based on a story by John Roeburt, this low-budget film, with lots of cameos by the likes of Dietrich, Fonda, Garfield and Meredith, is the story of a New York assistant district attorney who is determined to expose a "hate group" who have murdered his friend. He also has a romantic interest who is murdered by the gang when she tries to warn him that she had been sent by the gang to help with his destruction. Now he is really ticked off!

Everett Sloane
as Sam the Milkman
View All

There are no critic reviews yet for Jigsaw. Keep checking Rotten Tomatoes for updates!

Middling crime quickie not terrible but nothing special. Franchot Tone usually a fine actor seems to be going through the motions here perhaps off screen problems account for that since he and Jean Wallace who plays Barbara were ending their marriage at this time. The script is weak and the cameos by big stars are fun to watch for but add nothing to the story, famous people just pop across the screen and are gone. Hester Sondergaard is Gale's sister and the resemblence is striking.