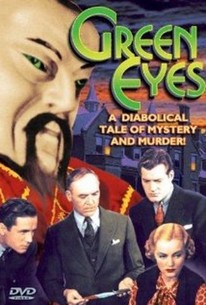 Based on H. Ashbrook's novel The Murder of Stephen Kester, Green Eyes gets off to a powerful start when host Stephen Kester (Claude Gillingwater) is found stabbed in a closet during a weekend masquerade party. The principal suspects are Kester's daughter Jean (Shirley Grey) and her fiancé Cliff (William Bakewell), whose planned marriage had been violently opposed by Jean's father. One of the party guests, mystery writer Bill Tracy (Charles Starrett), suggests to Inspector Crofton (John Wray) that there were others who wanted to see Kester dead, notably his business associates Pritchard (Alden Chase) and Hall (Arthur Clayton). When Hall commits suicide, leaving a note confessing to the murder, Crofton is satisfied -- but Tracy isn't. The "gimmick" in this well-crafted independent meller is its double-edged ending, in which two logical conclusions to the case are offered, each cancelling the other out.

Elmer Ballard
as Lenox, the Butler

There are no critic reviews yet for Green Eyes. Keep checking Rotten Tomatoes for updates!

There are no featured audience reviews yet. Click the link below to see what others say about Green Eyes!