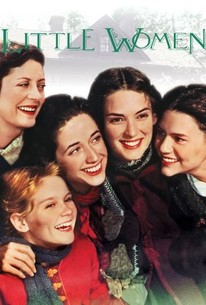 Critics Consensus: Thanks to a powerhouse lineup of talented actresses, Gillian Armstrong's take on Louisa May Alcott's Little Women proves that a timeless story can succeed no matter how many times it's told.

Critics Consensus: Thanks to a powerhouse lineup of talented actresses, Gillian Armstrong's take on Louisa May Alcott's Little Women proves that a timeless story can succeed no matter how many times it's told.

Critic Consensus: Thanks to a powerhouse lineup of talented actresses, Gillian Armstrong's take on Louisa May Alcott's Little Women proves that a timeless story can succeed no matter how many times it's told.

This newest version of Louisa May Alcott's tender novel is considered to be among the best as it chronicles the lives of four sisters growing up in the mid nineteenth century. The story is set in New England during and immediately after the Civil War. The four March sisters Meg, Jo, Beth, and Amy are living alone with their mother Marmee. Their father has left to fight in the Union Army and their standard of living and social status has been greatly reduced. The story primarily focuses upon Jo, a budding writer of adventure and crime stories. As the seasons turn and years pass the girls grow up. Meg marries her former tutor Brooke, Beth is damaged by scarlet fever, and Jo spurns Laurie after he proposes. Marmee advises Jo to celebrate her independence and Jo moves to New York where she becomes a trashy novelist under the pen name "Joseph." In New York she meets Friedrich Bhaer a German philosophy professor. She feels an instant connection to him. Meanwhile Amy is in Europe studying art when she encounters Laurie who has become a playboy. After a family tragedy and at the behest of her mentor the professor, Jo changes her writing style and becomes Louisa May Alcott.

Sean Finn
as Demi
View All

By and large it's immensely well done.

If you can't get the man (or boy) in your life to budge, have a girls' night out with Little Women, and leave 'em guessing at what you enjoyed so much.

An outstanding version of Louisa May Alcott's perennial, one that surpasses even the best previous rendition, George Cukor's 1933 outing starring Katharine Hepburn.

Be prepared, however, for a large beaker of the milk of human kindness.

Devoted and lovely retelling of the classic story.

None [of the adaptations] have quite captured the spirit as well as the 1994 version starring Winona Ryder...

The film has a star-studded cast that each bring their own sense of humanity and take on femininity to the role. Watching Little Women is sort of like coming home.

Kristy Strouse
In Their Own League

It's a bittersweet reminder to cherish our time together.

Despite the limitations placed by its literary source, the film possesses a real charm. [Full Review in Spanish]

An intimate and feminine film that beautifully transmits its warmth. [Full Review in Spanish]

Rarely is such a low-key movie so uplifting.

Yet another version of the classic novel. I loved the cast, and of course the story is timeless, so it's a good movie. The only problem is that if you've seen the other little women movies, it's just the same story again. Anyway, it's good movie.

Little women are about 4 women that grew up in the Civil War period. They were face with hardships like having their father off fighting in the war, being poor and being teenaged. When a new boy moves in next door the girl's world turns up side town. Over time they had to learn ho to deal with news things of growing up like falling in love and that they cannot live together under their parents house forever. Pros Good acting and plot. It had good music in this film. This film is really moving. Con it can be slow some times If you like coming age films, click flicks or really moving films, you should give this a try.

Yum, spitwad between Jo and Laurie.

Terrible movie. The dialog is horrible and it makes you want to drill yourself in the ears. The only thing that made this movie somewhat bearable to watch was Christian Bale, he was the only one able to pull off his role. It's got this secret feminist propaganda going on which is so redundant and boring. We get it, women are strong too, too bad I already knew it coming in. Just don't see it, trust me. It's not worth it.