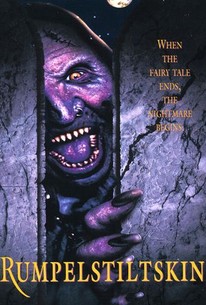 This groan-inducing would-be camp from the director of Leprechaun boasts some good makeup by Kevin Yagher but is still easily the worst of the '90s crop of fairy-tale horrors. Kim Johnston Ulrich plays a widowed mother who buys a jade rock at an antique store. When she cries on it, she releases Rumpelstiltskin (Max Grodenchik), a soulless hunchbacked gnome who grants wishes, demanding newborn babies as his price. He also spews a lot of bogus Freddie Krueger wisecracks, dons sunglasses to ride a motorcycle, and pulls off his own head to bite a cop's neck. Most of the film follows Ulrich and an obnoxious talk-show host (Tommy Blaze) as they flee from the little goon with Ulrich's baby. There are chases by motorcycle, 18-wheeler, dune buggy, bulldozer, and police car, as well as several crowd-pleasing explosions. At one point, Ulrich runs over the gnome and his severed hand gives her the finger. That should give an indication of the level of entertainment contained herein.

Donna Barnes
as Mother at Stream

There are no critic reviews yet for Rumpelstiltskin. Keep checking Rotten Tomatoes for updates!

Ah, mid-90s horror movies, you were truly horrible. Honestly, if it wasn't for the first Scream movie that came out a year after this, the 90s would've been a terrible decade for horror movies. Actually, now that I think about it, even with Scream, which I liked but hasn't aged well, the 90s were still terrible for horror flicks. They just had no identity, were poorly written and acted, among many other shit things. I'm not saying that every horror movie from the 90s was awful, that would be very ignorant of me, but I will say that it was a terrible decade for horror movies. And it's due in part to films like this. Honestly, however, to be fair, this film was legitimately awful. It's got terrible acting, terrible cinematography, horrifyingly bad writing, somehow even worse editing. In spite of all of that, part of me had fun watching this film. And I'm not saying fun because the film offers something that I enjoyed, far from it, but it's a corny and sometimes even purposely bad movie. I don't believe, for one second, that there was any pretension for this film to be anything more than it was. I'm not saying they weren't trying to put together a good movie, I'm just saying that they realized halfway through that they wouldn't and they might as well just go with the fact that it's a movie that people will laugh at and not with. I mean, they really couldn't have expected this film to be taken seriously on any level. If they did, then it really shows their lack of self-awareness. Everything about the movie screams low-budget, even the inspiration to use Rumpelstiltskin as a villain felt like it was just an uninspired choice to use as a horror villain. Not that you can't tell a story in a more traditional, yet modern, fashion with the character, but how do you use this character as a horror villain. Particularly when he isn't the most physically imposing character. Maybe this film wasn't meant to compete with the Jasons or the Freddies, but that's what it was going to be, inevitably, compared to. So when compared with those two, Rump comes across as a bit of a weak villain. I mean the story is fairly universal. Rump makes a deal with a person unaware they're making a deal and he's come to collect their child to steal its soul. That sounds more like a fantasy/thriller, not necessarily a horror movie. They do make the character a bit more like Freddie Krueger, where he's clearly got a sarcastic and cynical sense of humor, which really might be the best thing about the film. And it's not even that great to begin with, so I guess that says more about how terrible the movie is more than anything else. But I did laugh at some of Rump's lines, I'm not gonna lie. Again, they're not great, but they did get some laughs from me. The costume for Rumpelstiltskin itself is terrible, but what the hell can you expect. The situations are entirely unrealistic, but that's about as minor a complaint I can throw at the movie as everything else. Many horror movies are unrealistic and present situations that would never occur in real life, so I can't exactly complain about them here, but they are there and some nitpicky individuals will point them out and use that as a reason to dislike the movie. Though with the acting, writing, editing, cinematography, there's bigger things to get upset about. With that said, this movie sucks in pretty much every department, but I'm sure you can find something to laugh or keep you amused for the most part. You'll never think it's good, but at least it's an entertainingly bad horror movie.

Saw the poster and I was curious as to what kind of bad this film was. My verdict: the kind of bad that one should always avoid. I had more fun writing the content advisory of the film for IMDB than watching the actual film itself. Acting/characters: Pretty horrible. The female lead was irritating, the baby was...a baby, and the male lead was more annoying than the baby. But Rumpelstiltskin himself was horrible. Absolutely horrible. There He had pun based lines that would make Sequel Freddy say "Dude...dude...really? That's the stupidest pun I've ever heard. we get it you're from the 1400s and you're in the 90s now." Normally with a film like this the antagonist is the best part because he is the one who gets to do all of the fun stuff and it is easier for the actor to have more fun with the character so by extension, we enjoy the film a little more as well. Whelp, not here. Definitely not here. Here you just wanted the movie to end. It was only 90 minutes long and you wanted it to end 15 minutes in. It was terrible. 0/10 Plot: I don't see how it could have possibly worked. It feels like the sort of plot that has been done a million times before...probably because it has. Basic premise-wise I mean. Wishmaster was pretty much about the same thing just no baby involved: Ancient demon-type...thing. wreaks havoc in ancient times, wise old sorcerer/witch traps him in some sort of stone, fast-forward to the present, female protagonist releases him, demon-thingy wreaks havoc in the present day. I'm sure someone other than those two have done pretty much the same film....like Leprechaun...anyways, it is highly predictable and you can generally tell how it is going to end...15 minutes in...which is when you want the movie to stop...coincidence? Nope. I don't even remember a whole lot of the movie because I just didn't care about it at all. Who could? 0/10 Screenplay: Horrible. Absolutely horrible. I mentioned before that Rumpelstiltskin says stuff that would make a Sequel Freddy embarrassed to say. I know that it was kinda played for laughs as well as 'scares' but it failed completely on that level too. Rumpelstiltskin must have made at least 2 dozen puns about the fact that he was from the 1400s and it got old...before the movie began. No one likes that kind of garbage at all. I'm just going to say it here for any budding horror directors out there: NO PUNS FROM YOUR VILLAIN EVER!!!! EVER!!! EVER!!!! Even played for laughs it NEVER works. In fact, no puns from the rest of the characters either. There are better ways to get the occasional laugh than puns. Pretty much anything will do. But pretty much everything Rumpelstiltskin said was a pun. even when he wasn't making puns the stuff he said was still stupid beyond belief. That actually goes for all of the characters too. 0/10 Likableness: The poster for the movie is infinitely creepier than the movie itself. Nothing in this movie had anything resembling quality EXCEPT...the makeup for Rumpelstiltskin wasn't horrible. It could have been better, but it wasn't too bad. There were some moments of briefly okay effects too...but yeah, the rest was so bad I don't really want to give the movie points for that...but I'll give it half a point anyways. all that aside, NEVER see this movie. Stick to staring at the poster and imagine a better movie in your head. I wish I had just stuck to doing that. .5/10 Final Score: .5/40 .012% (S) Tomatometer rating: 0% Tomatometer rating if my review was added: 0% No trivia time for this one. Maybe I should take off that half point...

As horror's limply grasp at "new" characters to turn into icons, here we find a rather appropriate fairytale character given the horror makeover. Rumpelstiltskin has always been a rather fucked up story. A small goblinl like geezer taking babies just doesn't sound like family entertainment. This film is really 90's. It's the kind of cheesy nonsense you would expect from the creator of Leprechaun. It's all a tad more serious here. I guess wisecracking leprechauns and baby stealing goblins have to be handled differently. The film has some nice characters. A mother with a genuine investment in the horror of the story, a twat of a TV host who becomes something of a hero, and Rumpelstiltskin himself who is played with menacing glee. Other than that it isn't very impressive, but I did enjoy it.