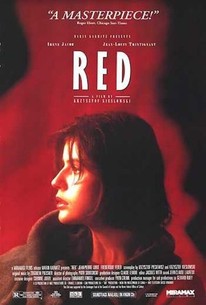 Critics Consensus: A complex, stirring, and beautifully realized portrait of interconnected lives, Red is the captivating conclusion to a remarkable trilogy.

Critics Consensus: A complex, stirring, and beautifully realized portrait of interconnected lives, Red is the captivating conclusion to a remarkable trilogy.

Critic Consensus: A complex, stirring, and beautifully realized portrait of interconnected lives, Red is the captivating conclusion to a remarkable trilogy.

A beautiful model named Valentine crosses paths with a retired judge, whose dog she runs over with her car. The lonely judge, she discovers, amuses himself by eavesdropping on all of his neighbors' phone conversations. Near Valentine's apartment lives a young man who aspires to be a judge and loves a woman who will betray him. From these characters' proximity comes spiritual kinship and mutual redemption.

Benoit Regent
as Olivier
View All

Kieślowski functions as a sardonic god who plucks his characters from harm at the last moment, having already bestowed saving grace on them. There's something desperate and beautiful about the crossed paths and accidental meetings.

Is it profound or is it facile? When a movie gives you goose bumps, it may not matter.

For all its cleverness, remains in essence the story of a friendship which, across the generations, leaves both parties a little easier with themselves but still prey to fate.

[Kieślowski's] microcosmic scrutiny of the world, sans judgment, suggests all things happen at once.

A superb example of French arthouse which is also very watchable.

It is the most curious of the trilogy, the most penetrating, asking questions it may not provide answers to.

It transcends the formula of its scenario to become something altogether more powerful and resonant.

... the rich red color scheme brings a vibrancy to the scenes: it's the color of love, anger, passion, heat, and it warms this into becoming the most forgiving film in the series.

No better swan song to such a rich, weighty career has yet been filmed.

It's a marvellous culmination of the trilogy, which together make some of the most fascinating stories in film.

The last and most remarkable film in Kieslowski's Three Colors trilogy is this warm and beautiful depiction of solidarity and fraternity (symbolized by the color red in the French flag), with excellent performances and bringing the trilogy to a wonderful, haunting conclusion.

A stirring, fitting final chapter to director Krzysztof Kieslowski's "Three Colors" trilogy, dealing with a model (Irene Jacob) who starts a relationship with a reclusive judge (Jean-Louis Trintignant) after a terrible accident. Where "Blue" missed a compelling complementary character to its lead star, "Red" shines from start to finish chronicling two very different people whose relationship does not feel contrived for a second. This is a passionate, intimate, subtle look on life and caring for other people, and it is thanks to two fine actors in Jacob and Trintignant that we care for these characters so much. This is a simple masterpiece that takes its time and never tries to "wow" you, but thanks to a well-controlled screenplay, as well as a devastatingly beautiful final act, it will remain lodged in your memory for eternity. Bravo!

Somewhat surreal and intriguing story, set around the beautiful Lake Geneva, of a young woman just starting out in life meeting a cynical old man who helps her find her way and in return gives him the peaceful release he needs. The pace is a bit slow in the early stages but it builds up to form the best movie in the trilogy.