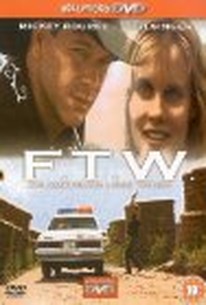 A modern cowboy and his lover are on the run in this crime drama. Cowboy Frank T. Wells has just finished 10-years in prison and now all he wants is freedom and a place to call his own. A former rodeo champion, Wells, then 24, was convicted for manslaughter after killing a man in self-defense. A part of himself died at that point. To get the money to achieve his dream and to recapture his past glory, Wells returns to the rodeo circuit in Montana. Scarlett Stuart is the feisty, roadwise, woman who enters his life following the death of her brother Clem, who was shot after killing four people during a bank robbery. Prior to his death, Clem had forced his sister Scarlett into an abusive, incestuous relationship. Life with Frank is only slightly better. Scarlett believes they are somehow fated because on her hand is tattooed the initials F.T.W. (which in her case stood for "f**k the world"). The two become lovers. As Wells works to reclaim his career, Scarlett helps out by robbing convenience stores and banks.

There are no critic reviews yet for F.T.W. (The Last Ride). Keep checking Rotten Tomatoes for updates!

There are no featured reviews for F.T.W. (The Last Ride) at this time.