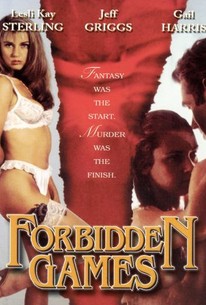 The modeling industry is notorious for its scandals, and in the world of high fashion, drugs, sex, and betrayal can lead to murder in the flash of a camera. The head of a high-profile modeling agency is dead, and the suspicious lack of evidence leaves former justice department hard-hitter Michael Brandon to suspect foul play. Hired to investigate the headline-grabbing death, Brandon's investigation soon leads him directly into the dark underbelly of the haute couture community. As the sexual tension quickly elevates, it's only a matter of time before the frenzied killer lashes out once again. The question this time is, will Brandon's investigation lead him to the killer in time to put a stop to the bloody rampage or will he simply become the next victim to wind up in a body bag? ~ Jason Buchanan, Rovi

There are no critic reviews yet for Forbidden Games. Keep checking Rotten Tomatoes for updates!

There are no featured audience reviews yet. Click the link below to see what others say about Forbidden Games!