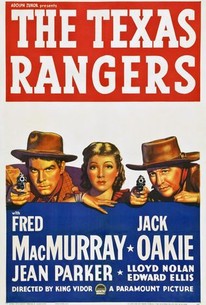 Made with the full cooperation of the real-life Texas Rangers (who never met a publicity gimmick they didn't like), this sprawling historical western stars Fred MacMurray as Jim Hawkins, one of three outlaws working the Lone Star State in the years following the Civil War. Both Hawkins and his partner in crime Wahoo Jones (Jack Oakie) decide to go straight, but their bandit pal Sam McGee (Lloyd Nolan) has not quite seen the light. Eventually, Jim and Wahoo join the fledgling Texas Rangers, an organization dedicated to bringing law, order and honest government to their state, while McGee cuts a swath of terror with his new gang. When the two reformed outlaws are assigned to bring in their old friend Sam, Jim balks but Wahoo accepts. In the film's most talked-about scene, McGee smilingly puts a hole through Wahoo's stomach with a gun he has hidden under a table. Now motivated by revenge (although he couldn't say as much in a post-Production Code film), Jim vows to bring McGee to justice, dead or alive, but preferably the former. Released to coincide with the Texas Centennial, The Texas Rangers was remade in 1949 as Street of Laredo; there was also a 1940 sequel, The Texas Rangers Ride Again.

Lloyd A. Saunders
as Ranger

Bobby Caldwell
as Boy in Coach

Critic Reviews for The Texas Rangers

Things continued to happen in accord with one of the screen's most archaic formulas.

What appears to have been intended as an epic of the Southwest is just a fancy boss opry.

[Audiences] are likely to excuse the picture for its pardonable bias on the grounds of an entertainment value enhanced by King Vidor's vigorous treatment of a story largely concocted by himself, brilliant photography by Cameraman Eddie Cronjager.

As a spectacle the picture is first class, and there are flashes of breezy comedy.

King Vidor, a richly experienced director, has been placed in charge of operations; and he spurs on every member of the cast to give a first-class display of acting.

Nothing else is amusing though.

I don't know when I've seen so much action, or watched the boys having a better time.

The Texas Rangers is proof positive that westerns can be made into superlative entertainment if produced on a large scale with a good cast.

Over-long in some of its documentary passages, and annoyingly interrupted by the unnecessary romance between MacMurray and Jean Parker, The Texas Rangers is, on the whole, a winner.

For those to whom no sound is more welcome than the crack of pistols and larger arms, Mr. Vidor has seen to it that plenty of ammunition and opportunities to use it are on hand at all times.

Action, drama, romance, comedy, and melody have been skillfully worked into a fine screen achievement in The Texas Rangers.

A workmanlike job on a glorified western.

There are no featured reviews for The Texas Rangers at this time.