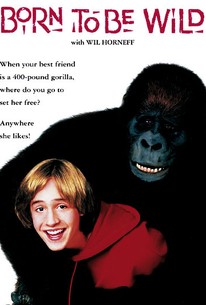 Born to Be Wild Photos

The unbreakable bond forged between a troubled boy and a gorilla forms the basis of this family-oriented children's adventure. Fourteen-year old Rick has become quite rebellious since his father abandoned them. Margaret Heller, his mother, is a behavioral scientist who studies communication with gorillas. She is finding it increasingly difficult to communicate with the sullen, isolated Rick. The story opens just as Rick, who had stolen his mother's van for a joyride, is released from jail. To punish him, Margaret forces him to clean out the animal research lab. Rick is especially loathe to clean out the gorilla cage. In that cage is a gorilla adept at sign language, Katie, whom Rick immediately despises. In time, he and Katie begin conversing, and the two become friends. But then Katie's legal owner, the cruel Gus Charnley, reclaims her and forces her to perform caged up in a carnival act. The degradation of his friend is more than Rick can handle, so he frees her and together they hit the road. Mayhem and adventure ensues until the two end up in court where Katie makes a touching plea on their behalf.

David MacIntyre
as Charnley's Guard No. 1

Rob Cea
as Charnley's Guard No. 2

Monica Hart
as Anchorwoman
View All

Critic Reviews for Born to Be Wild

Screenwriters Paul Young and John Bunzel... can't decide whether they're making a slapstick comedy or an impassioned ecological statement or just a harmless baby-sitter...

The film's biggest mistake is in going after the heartstrings instead of the funnybone.

In the end, Born to Be Wild insults the intelligence of both children and adults, and, therefore, is worth nobody's precious time.

It's a shame that the makers of "Born to Be Wild" went to such great lengths to create an absolutely convincing gorilla via technical wizardry only to waste their efforts on such a trite, predictable comedy-adventure.

Most of the chances for humor are downplayed in favor of a heavy-handed, sentimental effort.

This is not just for the very young . . . it's for the undiscriminating very young.

Audience Reviews for Born to Be Wild

Very few movies about teens and animals that befriend them are amusing. This one is but still nothing spectacular.

Born to Be Wild Quotes