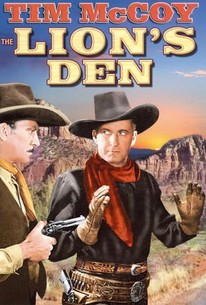 This Tim McCoy western casts the white-Stetsoned leading man as frontier troubleshooter Tim Martin. His current assignment is to impersonate a much-feared gunslinger, thereby flushing out a gang of rustlers. He does his job so well that his grateful employers shower him with reward money, but strong, silent Tim turns all the money over to heroine Ann Merwin (Joan Woodbury), enabling her to pay her mortgage. Former Ziegfeld Follies headliner Don Barclay shows up as Tim's comic sidekick, making the most of the few opportunities afforded him. Some of the best moments in Lion's Den occur at the beginning, as Tim McCoy performs a trick-gun act at a posh New York nightclub.

Critic Reviews for The Lion's Den

There are no critic reviews yet for The Lion's Den. Keep checking Rotten Tomatoes for updates!

There are no featured reviews for The Lion's Den at this time.