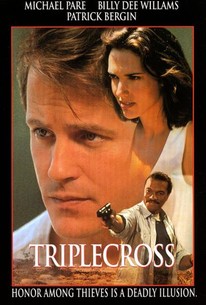 A man who turns stool pigeon to win his freedom falls into a trap when he falls for the wrong woman in this thriller. T.C. Cooper (Michael Paré) is a thief who is doing a long stretch in prison. Oscar Pierce (Billy Dee Williams) is an FBI agent makes Cooper an offer -- if Cooper is willing to help him get the goods on jewel thief Jimmy Ray Danker (Patrick Bergin), he'll let Cooper free on parole. Cooper warily agrees to the offer, but Pierce warns him to tread lightly around Julia Summers (Ashley Laurence), Danker's girlfriend. Cooper earns Danker's trust and they become partners for a major heist, but despite Pierce's warning, Cooper finds himself becoming obsessed with the beautiful Summers, and she finds herself equally attracted to him. Soon, Danker is certain that Cooper has betrayed him with Summers, and Summers begins to suspect that Cooper will betray both her and her boyfriend by turning them in to the Feds.

Kevin Rushton
as Alley Tough No. 1

Vince Guerriero
as Alley Tough No. 2

Susan Horton
as Girl in Club

James Kano
as Chinese Cop No. 2
View All

There are no critic reviews yet for Triplecross. Keep checking Rotten Tomatoes for updates!

There are no featured reviews for Triplecross at this time.