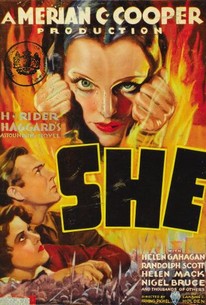 The second novel by British author H. Rider Haggard (his follow up to King Solomon's Mines) became this adventure classic, filmed twice previously in silent form. Randolph Scott stars as Leo Vincey, the descendant of an explorer who, according to family lore, discovered an immortality-bestowing fire on an expedition to a remote area of Manchuria. Leo sets out on a new voyage of discovery to the region's frozen wastes with a British scientist, Horace Holly (Nigel Bruce). Along the way, their team is joined by a trader, Dugmore (Lumsden Hare) and his daughter Tanya (Helen Mack). A tragic avalanche then kills everyone except Leo, Horace, and Tanya. Rescued by tribal shaman Billali (Gustav von Seyffertitz), the trio is led underground to Kor, a secret land with a hot climate ruled over by the cruel Ayesha (Helen Gahagan), better known to the natives as "She Who Must Be Obeyed."

Helen Gahagan
as She

Jim Thorpe
as Captain of the Guards

Critic Reviews for She

Women in adventurer-impresario Merian C. Cooper's schoolboyish action yarns are rarely allowed to do anything other than get kidnapped and rescued.

Despite the appeal in themes of immortality, reincarnation, and the folly of man's selfish indulgences, there aren't enough intricacies to make the premise consequential.

It was difficult to get much excited about adventures that seemed to make so little impression on the participants.

At best She is only a camp classic.

Thrillingly scored by Max Steiner and featuring backdrops you won't believe, the movie climaxes with a dazzling ceremony in the Hall of Kings, featuring hundreds of extras performing some of the most bizarre choreography ever filmed.

Audience Reviews for She

Corny and stilted drama with some impressive sets and costumes. While most of the acting is overly emotive it is interesting to see Helen Gahagan in her only film role, she went on to be a controvesial figure in California politics running unsuccessfully, as Helen Gahagan Douglas, against Richard Nixon for the Senate and coining the phrase Tricky Dicky.