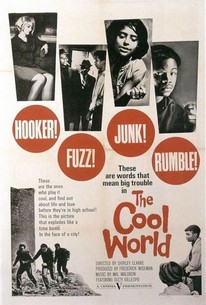 No relation to the later Ralph Bakshi semi-animated feature of the same name, Cool World is set in the meanest sections of Harlem. Hampton Clayton plays Duke, a powerful street gang member who claims that he is motivated by the Black Muslim movement. His subsequent criminal activities are thus not merely for gain, but as a means to declare black supremacy over the white establishment. One of director Shirley Clarke's few mainstream projects, Cool World was the first commercial film venture to be shot on location in Harlem. The largely unknown cast features future luminaries (and husband and wife) Clarence Williams III and Gloria Foster.

Critic Reviews for The Cool World

Clarke's images endow the characters' energies with a sculptural grandeur and embrace street life with a keenly attentive, unsentimental avidity.

The only thing that could make this world cooler would be a gun, and in the boy's quest to acquire one from a local hustler, Clarke shows a needy child maturing into a hardened criminal.

As we've come to expect of Miss Clarke's pictures, it is boldly and studiously styled as a literal documentation of a particular social scene, and its attack is more that of the reporter than of the interested teller of a tale.

Often crudely photographed, but with a brilliantly multi-layered sound-track which integrates some fine jazz.

It certainly had a visceral impact when it first appeared, helped enormously by Baird Bryant's cinematography and Dizzy Gillespie's score.

Sometimes the characters get a bit lost in the general schematics of the pic, which at times waters down its underlying irony. But, overall, Clarke has a firm hold on her characters and story.

The absence of technique is so pronounced as to raise some doubt as to whether Shirley Clarke, who directed it, had ever before seen a movie.

While Shirley Clarke's latest film, The Cool World... does not deal directly with the recent rioting that has turned Harlem into a shambles, it is nonetheless the most important document to date of the situation itself.

It is confused, overstated, chaotically edited and, for all its hand-held cameras and eavesdropping mikes, a conventional sob story.

An eye-opening film that captures ghetto life back in the 1960s.

This little alleycat film captures the day-to-day desperation of the ghetto world, mainlining its images with transfusions of eclectic jazz background.

Audience Reviews for The Cool World

a semi-documentary made by shirley clarke, recognized as one of the leading independent film makers of the early 60s new american cinema. starring real harlem youth and gang members, the film explores the ghetto slum life of drugs and violence without the heavy moralizing of most hollywood films of the period. brilliant editing and killer jazz score by the dizzy gillespie quintet