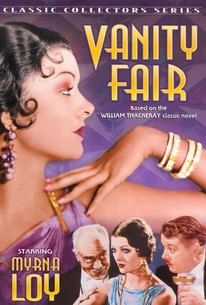 First filmed in 1911, William Makepeace Thackeray's satirical novel Vanity Fair has undergone several cinemadaptations, most memorably as the pioneering Technicolor feature Becky Sharp (1935). This 1932 version is perhaps the least known, probably because it has been updated to the 20th century and it isn't terribly good. In her first starring role, Myrna Loy plays the modernized Becky Sharp, a crafty lass who'll do anything to advance herself socially, even if it means romancing several older men whom she doesn't love. Going from rags to riches and back again several times, Becky continually bounces back, though the same cannot be said for many of her male companions. Of the large cast, the biggest surprise is former 2-reel comedy star Billy Bevan, who makes a surprisingly effective Joe Sedley (the character played in the 1935 Becky Sharp by Nigel Bruce). Not a classic by any means, Vanity Fair gets by on its curiosity value.

Montagu Love
as The Marquis of Steyne

Lilyan Irene
as Polly
View All

There are no critic reviews yet for Vanity Fair. Keep checking Rotten Tomatoes for updates!