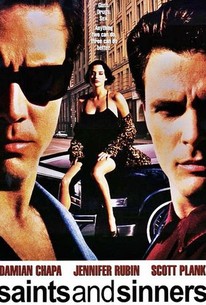 Sex, drugs, lies and betrayal form the basis of this gritty crime thriller that centers on two white guys, Pooch and Big Boy, lifelong friends who decide they want a piece of the local drug trade action in their old neighborhood. They end up being distracted by aspiring-model and pathological-liar Eva, who involves them in an increasingly kinky menage-a-trois that results in jealousy between the friends. Still the two, with the help of their pal Juanito, are getting close to having total control and will be able to make a proposition to the mob behind it all. Unbeknownst to the others, Pooch is working as a spy for the police, but toward the end, he is undecided about whether he should help them, or help himself.

Juan Fernández
as Priest
View All

Critic Reviews for Saints and Sinners

There are no critic reviews yet for Saints and Sinners. Keep checking Rotten Tomatoes for updates!

Audience Reviews for Saints and Sinners

There are no featured audience reviews yet. Click the link below to see what others say about Saints and Sinners!