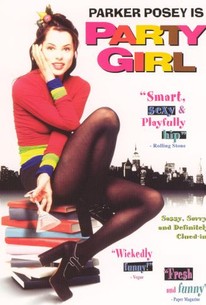 This lightweight, romantic comedy, set in the late '80s, takes viewers into the youthful New York party scene. It follows the adventures of Mary, a bubbly young woman with no clue as to her life's direction. After Mary is arrested for hosting an illegal party and selling alcohol in her loft, she must go to her godmother Judy, a serious librarian, for a job. At first Mary dislikes working there, but in time she finds a real passion for her new job. When not working, she is with her eclectic circle of friends. Mary falls for Mustafa, a Lebanese who runs a falafel stand. They do not spark right away as Mustafa is put off by Mary's superficial flightiness. Finally, one a rainy night, they passionately connect in the library. Afterwards, Mary finds her new career is in jeopardy. Party Girl has a unique position in film history as the first feature to premiere on the Internet (on June 3, 1995, the same day it premiered at the Seattle International Film Festival). In 1996, it had a spin-off into a TV series, also titled Party Girl.

The Lady Bunny
as Herself

Natasha Twist
as Herself

Tim Duperron
as It Twin

Robert Sorce
as It Twin

Mary is a spiritual descendant of Holly Golightly, and there's an echo, as well, of Edie Sedgwick, the late Andy Warhol superstar who moved the American-princess-on-a-bender mythology into the drug-rock era.

Party Girl aspires to be cinematic champagne but comes out tasting more like sparkling cider.

This exudes trendiness at regular intervals, and otherwise manages to be reasonably charming about Manhattan's melting pot culture, but my general response was still 'Wake me when it's over.'

The screenplay, by Ms. Mayer and Harry Birckmayer, has its occasionally funny lines, but not nearly enough to certify the film as a hip urban comedy in tune with the cutting edge of downtown New York.

If bad behaviour and smugness were truly charming, Party Girl might be as much fun as it imagines it is. And Madonna might even have a decent movie career.

What makes it delicious fun is Posey, a party girl for the ages.

Party Girl is an inspirational movie for any girl who feels both lost and found.

The cast is uniformly excellent -- particularly the relentlessly effervescent Posey and the imperious Sasha von Scherler, the director's mother -- and the modern take on old-fashioned romantic comedy is surprisingly effective.

Party Girl wouldn't be as beloved without Parker Posey, the jewel in this indie crown.

It's great to see where Parker Posey established her indie cred in this too-cool comedy.

Posey mixes her trademark edge with an appealing vulnerability, creating a realistic portrait of a twentysomething girl who doesn't quite know who she is or where she's going.

A quirky, inventive comedy, that comes off as sincere and lovable, as the lead character. Parker Posey ruled the indie films of the nineties, starring in 32 indie films throughout the decade and gaining the nickname "Queen of the Indies." She earns that moniker as the misadjusted misanthropic Gen X party girl Mary. The film starts with a party scene in a New York loft, occupied by all manner of outcasts, including drag queens, bare chested men and glitter covered twentysomethings. The film itself is a look at that generation, at being lost, without a job or a purpose when the world is waiting with an outstretched hand. Mary is a party girl, but not a dolt headed nymphet. She makes money in the beginning of the film running a business, a business based on gluttony and freedom, partying away the shame and indulgences of youth. The film distances itself from that lifestyle, and shows that you can love the world of parties and clubs while reaching a goal for the rest of your life. Mary is neither empty headed nor inherently unambitious, and as she interacts with the different people of her life, (everyone from the New York City public librarians, friends, club promoters, and a food truck vendor) we realize she is multi-faceted. The film reeks of indie in the best possible way. The music is nineties' club music the entire way through, the film itself has nice long shots, no quick cuts, and manages to bring each relationship into focus. This film cemented Parker Posey as the "it girl" of the era and led to a short lived sitcom on Fox. Mary is a candid and earnest character, and simply watching her shift between intense intellectual prowess and party girl proves to be the main interest of the film. Simply one of the best indies of the decade, with one of the best actresses in the lead role.

I didn't care for this movie, maybe because I'm not a party girl myself? Now that I think of it, this movie is the 90s version of Breakfast at Tiffany's. The story is boring for the most part, and entirely predictable. I did not like it.

Quirky romantic comedy about a flighty, free spirited hedonist. Parker Posey is likable as spunky and sassy Mary, a Holly Golightly for the 90s. We follow her as she learns the intricacies of the Dewey Decimal system, flirts with a falafel vendor and dances the night away at the many house parties she throws. Manhattan's trendy loft and club scene is nicely captured in this Gen X comedy drama from the mid 90s, but stylistically has more in common with 80s films like Desperately Seeking Susan and Something Wild. Also of note is actress Sasha von Scherler, the director's real life mother, who grounds the film as the no-nonsense librarian godmother who hires her.

A bit disapointing overall, but not HORRIBLE. I always have exceedingly high expectations for Ms. Posey and she seldom disappoints. Enjoyable, but not as good as it could have (should have?) been.