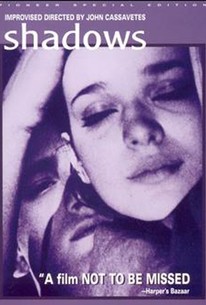 Shadows was John Cassavetes' first directorial effort. Like his later critically acclaimed films Faces and Husbands, Cassavetes fills the screen with probing, unflattering closeups. Unlike his other films, however, Shadows zips along at 87 minutes, avoiding the pitfall of putting the director's nonfans to sleep. The film is a straightforward account of a biracial romance (a far less common film subject in 1960 than today). Light-skinned African-American Lelia Goldoni falls in love with a white man Anthony Ray, who spurns her when he meets the rest of her family. Far from subtle, Shadows benefits from the undisciplined energy of its direction and the excellence of its individual performances. Costing a scant $40,000 (less than the average half hour TV episode of the era), Shadows won the Critic's Award at the Cannes Film Festival and led to more expensive studio assignments for John Cassavetes.

Joyce Miles
as Girl in Restaurant

Nancy Deale
as Girl in Restaurant

Gigi Brooks
as Girl in Restaurant

Lynn Hamilton
as Girl at Party

Marilyn Clark
as Girl at party

Joanne Sages
as Girl at Party

Jed McGarvey
as Girl at Party

Greta Thyssen
as Girl at party
View All

Now Streaming: X-Men: Days of Future Past, Far from the Madding Crowd, Silicon Valley and More

Shadows is not a film in which issues need to be resolved. It captures the tensions of its society on a vividly expressive level, and that is its strength.

[Shadows is] so far ahead of all Hollywood and independent films that once you've seen [it] you can no longer look at the official cinema: you know that American cinema can be more sensitive and intelligent.

Again and again the line between acting and living is erased. Caught in the ecstasy of collective creation, a handful of earnest amateurs have almost accidentally produced a flawed but significant piece of folk art.

The Beat generation espoused a rejection of mainstream American values, and John Cassavetes's Shadows feels like a relic from that movement.

This is the only Cassavetes film made without a full script (it grew out of acting improvs), and rarely has so much warmth, delicacy, and raw feeling emerged so naturally and beautifully from performances in an American film.

A very modern, impressionistic snapshot of New York bohemia with scenes linked not by dramatic line but by place, time and mood.

There is humor, pathos, romance, suspense, a back-alley brawl. The on-location backgrounds of Times Square, Greenwich Village, subways, cafeterias, bus terminals, add a great deal to the degree of realism.

I found it most intriguing by its unusual qualities and new approach.

Results in a lyrical realism, fresh and spontaneous.

An impressionistic whirl worth a thousand fumbled words

In this experimental film, Cassavetes' approach and a cast of unknowns brought a new sense of realism to the American cinema.

A new-waveish beatnik sociopolitical commentary that gets far less recognition than it deserves.

This is a pretty good, and very different, drama movie, but it's not all that exciting or intense. Plus, I wasn't familiar or impressed with any of the actors.

According to the information that can be found on the box, a very important and influential movie and Cassavetes directorial debut. It's VERY difficult to rate this one objectively after seeing A Woman Under the Influence first, which is a completely different movie. Somehow the style reminded me a little of A Funeral Parade of Roses. Couldn't keep my eyes off of Lelia Goldoni, she's beautiful.