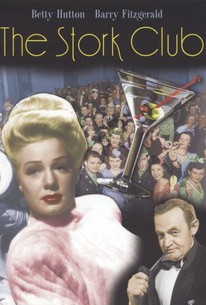 The Stork Club, the famed New York nightspot immortalized by columnist Walter Winchell (in return for special favors from its owners), is the setting for this typically brash Betty Hutton musical. Hutton plays a young hat check girl who rescues an elderly tramp (Barry Fitzgerald) from drowning. The old bum turns out to be a millionaire, and expresses his gratitude by setting up Hutton in luxury--asking for nothing in return. Hutton's boyfriend Don DeFore suspects hanky panky, but all is forgiven during the obligatory floor show. There are rumors that the Stork Club itself financed The Stork Club as a feature-length commercial. Whatever the case, ownership of the film was cloudy enough to allow it to slip into the public domain in 1982, which explains why Stork Club seems to be running 24 hours a day on cable TV.

Barry Fitzgerald
as Jerry B. Bates

Anthony Caruso
as Joe, the Fisherman

Jimmie Dundee
as Fred, the Fisherman

Reed Howes
as Patron
View All

There are no critic reviews yet for Stork Club. Keep checking Rotten Tomatoes for updates!

Harmless comedy with Betty her usual bundle of energy. She looks great and is for her at times even rather subdued, she also sings some high octane numbers and a lovely old ballad beautifully. Just one word of caution, the film itself is in pretty rough shape often washed out and grainy.