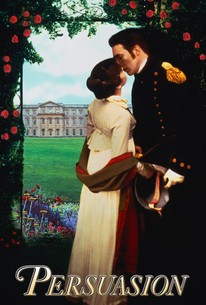 This theatrically released BBC television movie is loosely based on the final novel of Jane Austen. It is set in 1814 when the British navy fleet is returned from fighting the Napoleonic wars. A deeply indebted nobleman, Sir Walter Elliot is forced to lease his estate to Admiral Croft. Among Croft's many friends is the dashing Captain Wentworth who happens to be looking for a suitable wife. Seven years earlier he had been engaged to Elliot's daughter, but on the advice of Lady Russell, he broke it off. Despite that, when he again meets the daughter, it is obvious that she still loves him and the romance gradually picks up where it left off, and the wounds between the two are slowly healed.

A Jane Austen movie that is never pretty and only occasionally charming; instead, it is troubled, astringent, and touched with melancholy-not unlike the novel.

Persuasion is proof that the most repressed love stories can have the sweetest payoff. Like Anne herself, the movie reveals its wonders slowly.

The film offers the same pleasures as an Austen novel, as the audience sinks into a comforting, orderly world where life-shattering disruptions are handled with elegant ease.

Austen fans: Prepare to be swept away.

Michell's approach to Persuasion indicates that he is the rarest of literary translators -- one who is genuinely interested in a work's themes, its characters and what the author has to say about the world in which they exist.

For a film as esteemed as it is, it has always felt overshadowed by its proximity to BBC's beloved production of Pride and Prejudice.

An extremely intelligent and textured film.

Following the novel with unhurried fidelity, the film is as faithful to Austen as Anne Elliot is to the man of her dreams.

File this under films-that-deserve-better-reviews-than-I'm-giving them. I liked it, but I just couldn't get behind it. Persuasion is a mature Jane Austen film, more subdued and grown-up than Pride and Prejudice. The camera work is decidedly unstuffy at certain points. Also refreashing: Amanda Root in the main role. Unlike the conventionally pretty Gwenyth Paltrow and Keira Knightly, she a woman of modest looks (which is actually better for the source material). Austen heroines are never knockouts; they're clever feminists who don't quite belong in their surroundings. But more to the point, Amanda Root carries the film with the sorrow of her eyes, alone. She's perfection.

this movie affirms why i love jane austen so much. every little piece of information is an exceptionally juicy piece of gossip. marriage proposals are quickly offered and accepted/rejected. one can dwell on a rejection for many years and never get over it. because the time periods restricts and frowns upon blatant displays of affection, feelings of love must be identified with subtle nuances, such as a look, a word, or a letter. this movie is exceedingly romantic and i lived vicariously through anne. i felt the little heartaches she went through as wentworth callously ignored her. i felt the little jolt of shock as she discovered mr. elliot's true intentions. and my heart caught in my throat as she read the all-revealing letter from wentworth. this movie is a beautiful work of art that both pokes fun at the pretensions of nobility and also contains one of the most heartbreakingly beautiful love stories of all time. (my one complaint: all the characters are not very attractive. i thought mr. elliot was the only decently goodlooking person in the entire movie. anne's sisters were also quite pretty, but i quite disliked them so they don't matter.)

The romance in this film could never be equaled. Anne and Wentworth are characters that are not to be forgotten in this amazing adaptation of the Jane Austen novel of the same name.

[font=Century Gothic][color=navy]"Persuasion" starts just after Napoleon's defeat in 1814. Naval officers are returning after years at sea. One of those naval officers is Captain Frederick Wentworth(Ciaran Hinds) who eight years before had been rejected by Anne Elliott(Amanda Root) a kind young woman who acted on advice from Lady Russell. At the time he was a young naval officer with little prospects but he has returned a captain and is now quite wealthy.[/color][/font] [font=Century Gothic][color=#000080][/color][/font] [font=Century Gothic][color=#000080]"Persuasion" is about listening to one's own heart and seizing the opportunity when it presents itself. It is also a subtle satire on the class structure of England in the early 19th century. For example, Sir Walter Elliott is snobbish towards the returning naval officers who are actually much more wealthy than he is and are also much more noble. What happens may be considered, as most things written by Jane Austen, quite predictable but the performances by the two leads are quite excellent and make the movie worthwhile. [/color][/font]