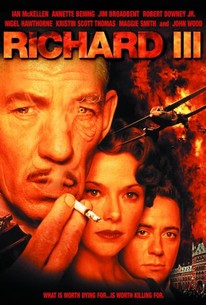 Critics Consensus: This re-imagining of Shakespeare's Crookback King relocates the story in 1930 and features an indelible star turn for Ian McKellen as the monstrous and magnetic King Richard.

Critics Consensus: This re-imagining of Shakespeare's Crookback King relocates the story in 1930 and features an indelible star turn for Ian McKellen as the monstrous and magnetic King Richard.

Critic Consensus: This re-imagining of Shakespeare's Crookback King relocates the story in 1930 and features an indelible star turn for Ian McKellen as the monstrous and magnetic King Richard.

This innovative, fast-paced, cinematic adaptation of Shakespeare's classic work transposes the setting to an imaginary Nazi-like 1930s England. Ian McKellan is mesmerizing as the ruthlessly ambitious Richard, who rises to power by having anyone standing in has way murdered, including his own brother and the young children of his predecessor.

Maggie Smith
as Duchess of York

Marco Williamson
as Prince of Wales

Marc Williamson
as Prince Of Wales

Rarely has a film used London's landmarks so cannily.

The "fascist" staging could have been hackneyed, but Loncraine carries it off superbly as the showcase for action-thriller noir.

Whatever its flaws, the revelation of this Richard III is that updating Shakespeare may be even more ideally suited to the movies than to the stage.

It is a brutal reminder that while we may be able to inoculate ourselves against diseases of the body, diseases of the mind will always flourish as long as fascist impulses remain undiagnosed.

But when thoughts turn to the Bard, and his unique way of pinpointing the flaws in human nature that bite us again and again, they inevitably settle on Richard III.

With a screenplay (co-written by McKellen) that crackles and spits like a roasting pig, it was clearly as much of a blast to make as it is to watch.

On its simplest and most satisfying level, Loncraine's Richard III can be enjoyed as an ingeniously sustained and spectacularly ballsy stunt.

"Richard III" is the kind of movie that earns the right to interpret the bard's ideas through alternate perspectives because it does so without sacrificing its core values or integrity.

Ian McKellen is Mesmerizing in this performance. The modernized setting and story-telling are a bit off-putting.

Richard III like you've never seen it before! Ian McKellen was amazing in this as he embodies the evilness of Richard III. Inventive and ruthless, this version cuts much of the dialogue in the play which makes it much more bearable than Olivier's 1995 snore-fest. Even if you're not fond of nor familiar with Shakespeare, you'll find this movie pretty enjoyable.

one of shakespeare's more brutal plays reset in the '30's with striking atmosphere and a stellar cast. it's obvious sir ian had a blast making this and he is bloody marvelous. this is a very abridged version but it's definitely one of the most successful 'modern' adaptations i've seen. worth checking out even if you're not a fan of elizabethan drama!