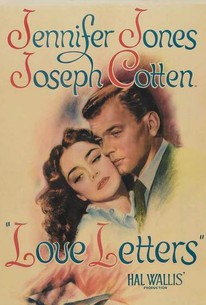 Ayn Rand wrote this adaptation of Chris Massie's book Pity Mr. Simplicity, about a soldier who falls in love with a former comrade's wife -- an amnesiac who may have murdered her husband. The story begins in Italy when two soldiers, Allen Quinton (Joseph Cotten) and Roger Morland (Robert Sully), hatch a scheme concerning Singleton (Jennifer Jones), his girl back home. Allen agrees to write love letters to Singleton for his friend and, based on the heartfelt emotions evident in the letters, she falls in love with Roger. Returning home, Singleton and Roger marry, but Roger proves to be a drunken, abusive husband. One night, as Roger is beating Singleton, he is stabbed to death by her stepmother. Singleton goes in to shock, rendering her unable to recall the murder, while her stepmother has a stroke, making her unable to speak. Accused of murder, Singleton is sentenced to a year in jail. Allen, in the meantime, hears about the murder of his friend and comes to visit Singleton, and the two proceed to fall in love.

Ethel May Halls
as Bishop's Wife

Conrad Binyon
as Boy in Library

It's all on the preposterous side, but it's done with such conviction and artistry that both its melodrama and its unabashed romanticism work.

Never managed to stir me with its depressing soap opera love story and its gooey ending.

Messy and melodramatic, Love letters offered good acting ensemble but awful direction and screenplay. The whole plot was predictable, the ending was really disappointing. I was expecting more from Ayn Rand but even a genius cannot transform a doomed story.

Jennifer Jones does seem to end up in these overly sentimental pieces. Unlike Love is a Many Splendored Thing, this one doesn't work as effectively. Yucky yucky in the end.