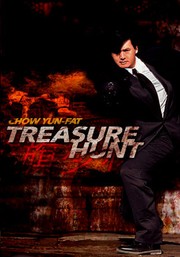 You could say it's The Killer meets Tai Chi Master.

So that kinda tells you...you're getting rip-offs pasted together that don't belong. It's original in that sense even for chinese film. But a movie this flawed can never be thought of as good to anyone, just throw-away entertainment that's trying to win awards for being heartfelt at the same time.

Too bad because I recall Gordon Liu worked his ass of in an incredible role as the monk, and he had a wicked fight scene. Fans of his or Chow Yun-Fat should take a look if you're running out of their films to see.

Naoya K
January 21, 2012
It's so mysterious film that I cannot tell whether it is good or bad. It's just very different from common HK movie - at least, different from common Chow Yun-Fat movie. Not only the eccentric setting but also the way to tell the story are original in a good word and confusing in a bad word. The basic plot and some scenes, especially the beginning and whatever happens in the shaolin temple, are really poor, but it has several beautiful and stirring scenes like the final battle and the ending. Jeffrey Lau is not well recognized as an auteur, but the films he directs always have some really original and mysterious attraction that only he can create. He is the mysterious guy in HK movie business, really.

Steve W
August 4, 2011
One part gory action thriller, one part romantic movie. It's not perfect, but there are lots of love dovey sequences in between the action scenes. The chemistry between the leads is great, even though the movie is wildly uneven.

"He was calling out a woman's name in his sleep so I woke him up with my fist."

Jeffrey Lau, director of Second Time Around, A Chinese Odyssey, Operation Pink Squad I & II, and Mortuary Blues, delivers Treasure Hunt (or American Shaolin). The storyline for this picture initially seems on par with an Indiana Jones film and quickly transitions into a love story. The acting is marvelous and the cast includes an all star group that includes Phillip Kwok (Lizard from the 5 Deadly Venoms), Chow Yung Fat, and Gordon Liu (Master Killer).

"I'll never be a whore again."

I was at my favorite kung fu cheos in Valley Stream, New York and came across this picture. I had to see this based on the marvelous cast. While the film as a whole was a disappointment, the fight between Phillip Kwok and Gordon Liu were worth the price of admission. That may have been a redeeming scene, which in itself was worth a 5, the rest of the film is a confusing mess.

Steve B
September 1, 2009
Very typical chinese spy and kung-fu flick full of action and love & entertainment. Chow Yun Fat is good as for the Monk in chief.