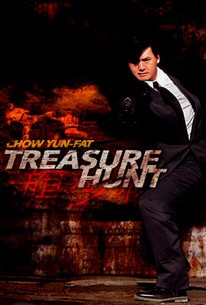 Jeff Lau directs this action flick cum romantic comedy. The film centers on CIA agent Jeff Chang (Chow Yun-fat) who is assigned to steal a Chinese national treasure, even though he is not told what this treasure might be. He meets his contact Tong Ling (Chin Han) who instructs him to hold up in a Shaolin temple. There he meets Miss Mei (Wu Chien-lien), who proves be an unusual woman by any yardstick -- she has the freakish ability to make flowers grow on people and also can pass things through other solid objects. At first Miss Mei thinks little of the suave spy, but as Jeff teaches the monks at the temple to play baseball, she begins to warm to him. Meanwhile, Jeff begins to realize that the treasure at the heart of his mission is none other than Miss Mei. ~ Jonathan Crow, Rovi

A garbled mess and a disappointment for fans of everyone involved.

There are no featured audience reviews yet. Click the link below to see what others say about Treasure Hunt (Hua qi Shao Lin)!